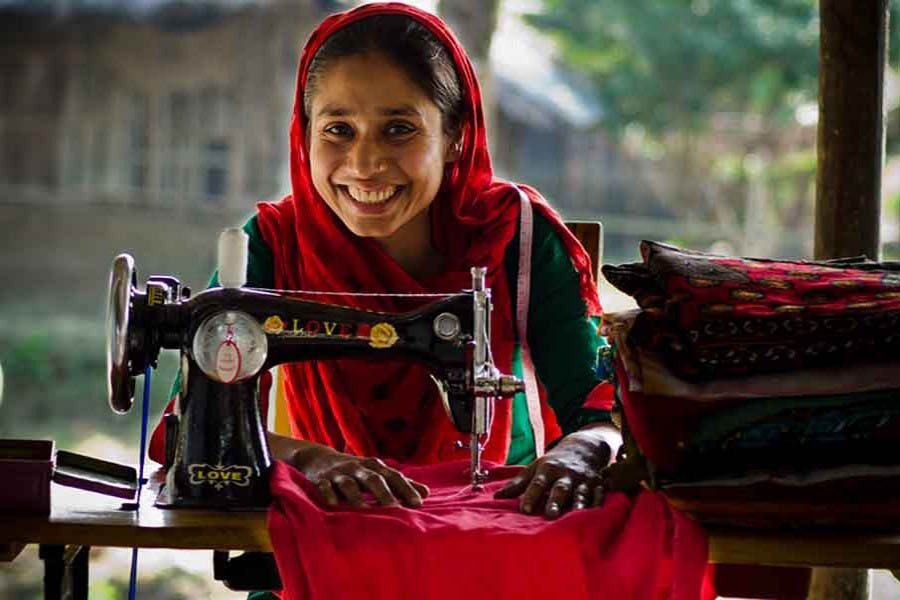 Women’s empowerment is a necessary precondition for eradicating global poverty and safeguarding human rights, especially at the individual level, where it aids in the formation of a foundation for societal change. Women make up nearly half of Bangladesh’s population, with 80 percent living in rural regions (Bangladesh Bureau of Statistics). However, on the basis of twenty variables linked to health, marriage, children, education, employment, and social equality, their position has been classified as the lowest in the world. In a patriarchal culture like Bangladesh, women have a lesser status than males, who have the sovereign ability to rule houses and society as a whole, while women are frequently sequestered in their homes. Women have a limited role in household decision-making, limited access and control over household resources (physical and financial assets), low individual assets, heavy domestic workloads, restricted mobility, and inadequate knowledge and skills, according to a World Bank study conducted in Bangladesh.

Ameena Begum of Govinda Sree village in northeast Bangladesh is one of hundreds of determined and resourceful women living in disaster-prone areas who have been helped by BRAC and partners to better their families’ living conditions. Ameena’s leadership also enabled her neighbours to earn money through a variety of activities.

In the last 20 years, Bangladesh has achieved significant progress in improving the lives of women and girls. Maternal mortality rates are decreasing, fertility rates are decreasing, and gender parity in school enrolment is increasing. Simultaneously, 82 percent of married women are victims of gender-based violence, and widespread sexual assault inhibits women from reaching their full potential. Despite attempts by the government and non-governmental groups to discourage child marriage, Bangladesh’s rate of child marriage remains the highest in South Asia, with 59 percent of girls marrying before the age of 18. Women’s involvement in the labour is still restricted to a few low-paying industries. The profitable ready-made garment business, which is Bangladesh’s largest export industry, employs three million Bangladeshi women. Women are becoming more active in small and medium businesses, yet despite various government programs, there are still significant financial inequalities that women confront.

According to the World Economic Forum’s Global Gender Gap Report 2017, Bangladesh has achieved huge strides in decreasing the gender gap in the previous ten years.

Bangladesh has been a role model for women’s empowerment during the last decade, and the nation has seen a significant transformation in society as a result of its efforts. The notion of women’s empowerment, as well as initiatives in this area, have helped Bangladesh achieve consistent development in gender equality, allowing it to clinch first place in gender equality (among South Asian nations) for the second year in a row in the 2017 Gender Gap Index.

Women now make almost half of Bangladesh’s population, and their economic engagement has expanded dramatically. In reality, national and international policy methods have been reflected in policy to secure women’s progress so that they have control over their lives and may influence society as decision-makers. Collateral-free microcredit with a 5% service charge is available for rural women’s economic empowerment. 10% of the Small Enterprise Fund and 10% of industrial plots go to women entrepreneurs. The RMG industry alone employs almost 3 million women. From 24% in 2010 to 36% in 2013, Bangladesh’s female labour force has increased. In the recently enacted Budget 2014-15, gender sensitive budgets were established for 40 ministries, and a special allocation of TK.1 billion was set out for women’s development.

JOYEETA is a Ministry of Women and Children Affairs project aimed at uplifting Bangladeshi rural women. It’s a business platform that helps grassroots female entrepreneurs promote and market their own arts, crafts, goods, and services. Under the Department of Women Affairs’ “Development Efforts of Women Entrepreneurship” initiative, an autonomous sales centre was constructed for the first time in Dhaka’s Rapa Plaza to market the products of women entrepreneurs. At the moment, 180 businesses have been assigned 140 booths. Stalls are also offered for disabled and persecuted women entrepreneurs.

From 16.2 million in 2010, the number of working women climbed to 18.6 million in 2016-17. According to The Global Gender Gap Report, Bangladesh ranked 47th out of 144 nations in 2017, whereas India, Sri Lanka, Nepal, Bhutan, and Pakistan ranked 108, 109, 111, 124, and 143, respectively. Rural women in Bangladesh take an active part in maintaining household food security, notwithstanding their usual domestic chores. They are in charge of the majority of the agricultural labour on the farm. They not only assure the family’s protein supply by raising cattle and catching