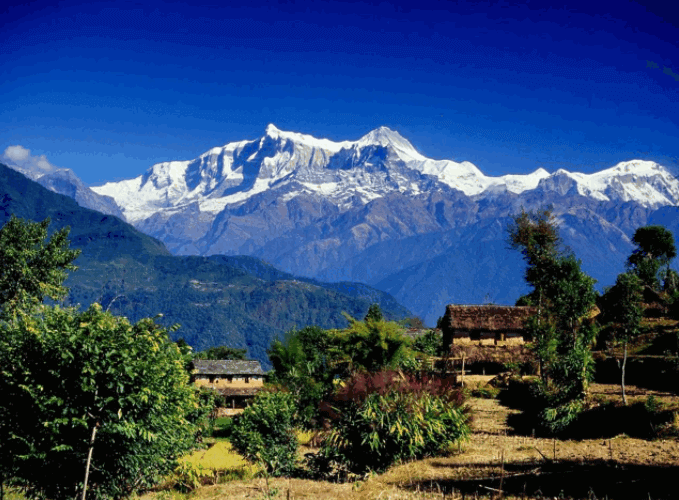 Nepal, a South Asian country, is a land of natural beauty. The central city of Pokhara, bordering the temple city of Kathmandu and Annapurna, is like a piece of paradise. Nagarkot, on the other hand, about seven and a half thousand feet above sea level, seems to be another name for heaven. The golden glow of the red sun rising through the chest of the Himalayas peeks behind the clouds from time to time.

Although Pokhara and Nagarkot are my main destinations in Nepal, I have seen skyscrapers in Kathmandu.

Nepal is called the land of temples. Evidence was also found while walking around Kathmandu city in the late afternoon. One of the most iconic symbols of Kathmandu is the Sambhunath Temple.

Kathmandu at night seems to be more lively. As evening falls, the city’s heart, Thamel, becomes a gathering place for domestic and foreign tourists.

At the end of the night, the morning journey to Pokhara, the second-largest city in Nepal. About 5,000 feet above sea level, as I walked along the winding path of miles and miles of winding hills, I felt as if I understood the road to heaven.

It was late afternoon when the insects arrived. We met in a small town surrounded by well-arranged hills. And behind the distant mountains is the vast, majestic Himalayas in their form.

Just when the sun is setting, a boat ride on the chest of Phewa Lake, which flows close to the Annapurna peak of the Himalayas, evokes a heavenly feeling. The beautiful view of the sunset in the heart of the lake will make anyone forget their mind without knowing it.

A little further on by boat, in the middle of the lake, the Varahi temple is located like a piece of the island.

One tourist said that this temple is magnificent in the middle of the lake. The sky is a little cloudy today. So even though the Himalayas are not fully visible, it feels good to come to this lake surrounded by mountains.

Another foreign tourist said that the most positive thing about Pokhara is no air pollution. It is a quiet city full of natural beauty. The people here are also quite sincere.

“Even though I am Nepali, this is my first trip to Pokhara,” said a Nepali tourist. Not only this lake, the surroundings of the lake are also stunning.

Another attraction for tourists visiting Pokhara is paragliding. If you go to the top of a high hill in Sarankot of the city, you will see hundreds of paragliders flying in the sky like birds.