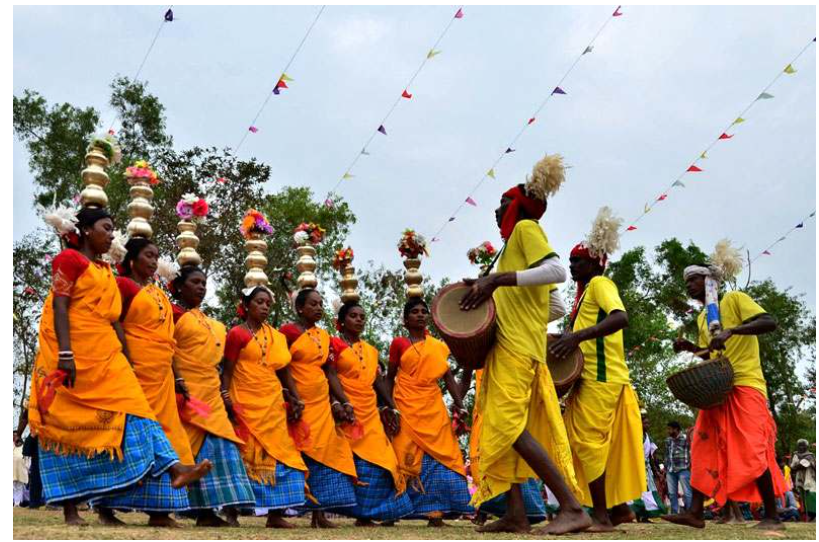 The Santals are the second-largest ethnic group among the indigenous people living in Bangladesh. They prefer to call themselves “Santal”.

They call each other “Har.” Har means man. The aborigines are native to Chhota Nagpur in India and the hills and vast areas of Assam. They live in Rajshahi, Natore, Naoga, Chapainawabganj, Bogra, Dinajpur, Rangpur, Pabna and the other north-western districts.

The biggest festival of Santals is called Sohrai, or Sahara. The words “sohrai” or “saharaya” come from the word “Shah,” which means “to increase.” This festival makes appeals to the bongos (gods) through special rituals to increase wealth and cattle. Every Poush is celebrated with pomp and circumstance in the Santal villages every year.

On this occasion, married women get a chance to come to their father’s house. So all year long, they are waiting for the festival. This time they sing:

The formality of the first day is called “um” in the language of the Santals. On that day, the men of the village gathered in a field. There is a place where a boundary is made with sun-dried rice. A little hariya or chuani is kept on the vermilion and leaf stalks for the creator. Haria and Chuani are their favourite drinks.

Then Mahat sacrificed chickens there for Jaher Era, Marangburu, Moraiko, Turui Ko, Gosai Era, Pargana Bonga, and other Bonga. Every house gives away the chickens. After the sacrifice, everyone from the field danced and sang and came to Mahat’s house. Khichuri is cooked with chicken there. Hariya and Chuani started eating. The Sohrai festival of the Santals got off to a good start, mainly through cooking at Mahat’s house.

The second day of Suhrai is called “Daka”. On that day, every family invites their relatives and daughters-in-law. As a result, everyone has access to good food at home. The third day of the festival is full of humour and joy. This day is called “Khuntao”. On the same day, a bull was tied to a pole with round marks in the yard of a house. The bull’s horns and the oil cake, or pakwal, are hung around the neck.

Then the madal, or drum, is played loudly. The bull started barking at the sound of Madal. In such a situation, the indigenous youths rush from outside the spot and try to get the oil cake from the horns and throat of the bull. In this way, the whole village was delighted to snatch the oil cake. They dance and sing with joy.

The Santals set out in groups with nets and poles to catch fish or crabs on the fourth day. They call it “haku katkom”. On the fifth day, the errors of the previous four days are corrected, and the following days are planned. The Santals call it “Jhali.”

The sixth day of the Sohrai festival is mainly for hunting. In the language of the Santals, it is “Sendrara.” That morning, a group of Santals came out hunting with bows and arrows. The rest of the tribe, including Mahat, went to the houses of five members of the village council, performed dances, songs, and various games, and collected rice and stored it in Mahat’s place. There are various competitions for the hunters returning from hunting.

What exactly is that? A banana tree was planted in the field, along with three oil cakes made by Mahat’s wife. The winner is the person who can successfully plant a banana tree from a distance using a bow and arrow. The winner is then required to adhere to several additional rules. For example, the winner must create five bows perpendicular to the ground, leap like a frog, turn around, and create one bow perpendicular to the ground one at a time, rearranging them according to the same rules. The banana tree is then cut into pieces and carried on the winner’s shoulder.

In that situation, everyone carried the winner on their shoulders and brought him to Mahat’s house. At this time, everyone is entertained here with murdi and hariya. And khichuri is cooked with the victims. So the whole village is floating in Khichuri and Haria. On the seventh day of Sohrai, everyone goes from house to house and eats good and bad food. Thus, the Sohrai festival of the Santals ended with various arrangements and pomp.