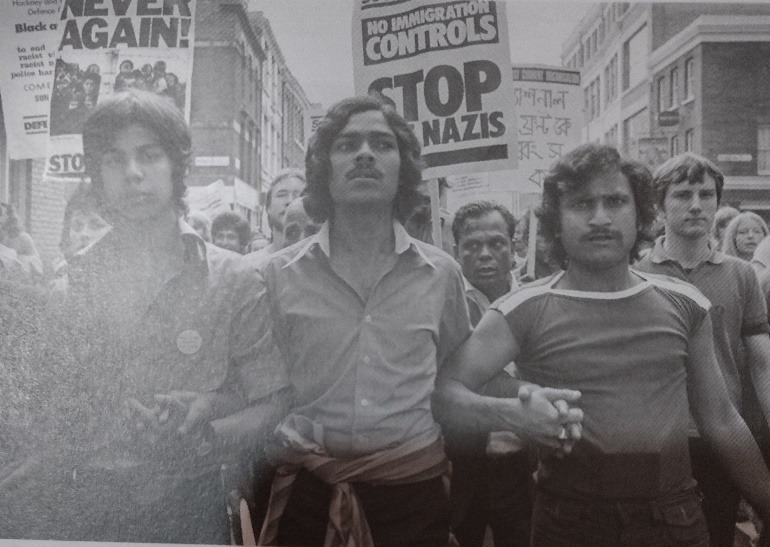 Now the UK Bengali community are furious and concerned about NRBs getting second-class treatment by the law  enforcement agencies of Bangladesh and demanding that the government must carry out a full independent investigation on the issues of NRBs.

The arrested are Jamal Miah and his brother Kamal Miah; both of them were involved in fighting against racists and racism in 1978, and the Four Corners and Swadhinata Trust did a project on Brick Lane 1978 photographs of various anti-racist events took placed during 1978, two months photographs exhibition ended on 15 September 2022, and two of the arrested are ‘Heroes’ of 19878 and both are residents of Sylhet’s Osmaninagar Upazila, Abdul Ahad and his brother Abdul Hai of Biswanath the seven directors Motijheel Thana police have arrested seven directors of Homeland Life Insurance Company Limited from the company’s head office in Dhaka on charges of embezzling customer policy money.

Their bail application was heard 29 September 2022 and they got bail. It is known that they came to Dhaka from England to participate in the company’s annual general meeting. On September 21, one or two days after arriving in Dhaka, they held a meeting at the head office of Homeland Insurance. At that time, the Motijheel police station appeared with the arrest warrant issued against them and arrested them. Yasir Arafat Khan, officer-in-charge of Motijheel police station, told Bangladesh Pratidin that warrants were already issued against the arrested persons filed by customers. However, they were out of the country, so they could not be arrested. We got hold of them, legal action was taken, and those arrested were challenged in court.

Meanwhile, uproar have started in Sylhet and London in this incident. All the seven directors arrested from Dhaka are UK nationals, and their homes are in Sylhet and Sunamganj. The police arrested them at the head office of the insurance company in Dhaka last Wednesday on 21 September 2022. Although a case has been filed against the company’s vice chairman and six directors for embezzlement, the chairman, managing director, and general manager have not been charged for some mysterious reason. The arrested are Jamal Miah and his brother Kamal Miah, residents of Sylhet’s Osmaninagar Upazila, Abdul Ahad and his brother Abdul Hai of Biswanath, Jamal Uddin of Chhatak and Abdur Razzak of Shahjalal suburb. Among them, Jamal Miah is the company’s vice chairman, and all the rest are directors. The identity of another director, Abdur Rab, is not known. Mohammad Yasir Arafat Khan, OC of Motijheel Police Station of Dhaka Metropolitan Police, also said, “An arrest warrant was issued against them from the CMM Court of Dhaka.” They were arrested and handed over to the court based on the warrant. Four cases were filed on the fraudulent breach of trust by embezzling the policy money of the insurance customers of the Arpara regional office under the Shalikha police station of Magura district. The court took cognizance of the cases and issued arrest warrants against the accused. If the warrant copy is sent to the Dhaka Metropolitan Magistrate Court, the warrant is sent to Motijheel Police Station for Tamil. The police arrested them after getting a court warrant.

Meanwhile, a source in Homeland said that they were arrested from the principal office of the insurance company located in Motijheel of the capital last Wednesday on 24  (September) around 4:30 pm. All those arrested have been sent to jail. It is known that there are many institutions in their name in the country and abroad. For example, Jamal Makdus established Jamal Uddin High School in his home village of Chhatak Thana. He is also one of the entrepreneurial directors of Wonderland Park near Sylhet Osmani Airport. When asked about this, Homeland Insurance Chief Executive Officer Biswajit Kumar Mondal said, “It is an internal issue.” After that, when the phone was disconnected, he did not receive the call even though he had called repeatedly. Sent a message on WhatsApp, but he did not respond. Meanwhile, the company has been accused of misappropriating customers’ money and non-payment of insurance claims for a long time. Apart from this, there are various irregularities in the management. There are various allegations of irregularities regarding the listing in the stock market. It is alleged that the expatriate directors repeatedly urged the directors and management committee in the country, but they did not take any initiative. That is why they were angry when they returned to the country, secretly informed the police, and handed them over. Even in this case, none of the directors or management committee in the country has been made an accused. Again, there is a counter-complaint that the expatriate directors used to corner those in the country and force the workers to implement unilateral decisions in the management of the company. It is said that there is fear among the shareholders and employees of the company. Mr X: So. now is a time  time government relevant agency must conduct a full investigation and get the main culprits of such impurities within the company and punish them, also ensuring that in future no other NRBs get ill-treatment by the law and enforcement agencies that is the demanded by the UK Bengali community.