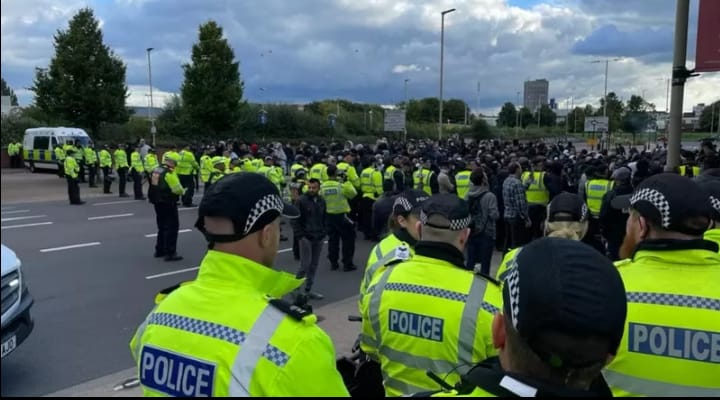 On Saturday, 17 September 2022, a large-scale disorder erupted in Leicester, prompting police and community leaders to appeal for calm.

Police made two arrests had been made, and the trouble flared up after “an unplanned protest”.

It is the latest of several incidents, including violence, after an India and Pakistan cricket match on 28 August 2022.

A significant police operation will remain in the area in the coming days.

Suleman Nagdi of the Leicester-based Federation of Muslim Organisation (FMO) told the BBC: “What we have seen on the streets is very alarming.” “There have been problems in the community since the India and Pakistan match, and while that games

often spark gatherings, they have not in the past turned this ugly.”

“We need calm- the disorder has to stop, and it has to stop now. There are some very dissatisfied young men who have been causing havoc”.

“We need to get the message out that this must end and try to do this through parents and grandparents talking to their sons.”

Sanjiv Patel, who represents Hindu and Jain temples across Leicester, said he was deeply saddened and shocked by Saturday night’s disorder.

He said: “We have lived in harmony in the city for many decades, but over the past few weeks, there are things that need to be discussed around the table to get out what people are unhappy about.

Resorting to violence is not the way to deal with this.

“We are horrified and deplore what was happening on (Saturday) and across the last two weeks.

Across the Hindu and Jain community and with our Muslim brothers, sisters, and leaders, we consistently say, ‘Calm minds, clam heads’.”

He warned people to be wary of disinformation on social media.

The police claim one man was detained on suspicion of conspiracy to commit violent disorder and another suspected of possessing a bladed article. They remain in police custody.

Leicester city mayor Sir Peter Soulsby: “I don’t think anyone saw the confrontation (on Saturday) as a likely outcome, and police had been given reassurance things were calming down.

“Things got very nasty indeed on 17 September. I am apprehensive on behalf of the people caught up in it, and I was impressed by how police responded to it- it can’t have been an easy task.”

He added: “it’s mostly men in their late teens and early 20s, and I have heard suggestions people have come in (to the city) from outside looking for an opportunity to have a set to.

“It’s very worrying for people in the areas where this has happened.” Sir Peter said it was essential that community leaders continued to try to de-escalate the situation. Still, he acknowledged it was challenging to get through to young people.

On Saturday, 17 September night, Leicestershire Police’s temporary chief constable Rob Nixon said: “We’ve had numerous reports of an outbreak of disorder in parts of the East Leicester area of the city.

“We have got officers there; we are taking control of that situation; additional officers are en-route, and dispersal powers and stop and search powers have been authorised.

“Please do not get involved; we are calling for calm.”

Community leaders from East Leicester were on the ground with officers. They were calling for calm and encouraging people to go home, and the police force added.

In the early hours on Saturday, 17 September, police said the situation was calming and “under control”, and many searches had been conducted.

“Several incidents of violence and damage have been reported to the police and are being investigated,” a spokesperson said.

“We are aware of a video showing a man pulling down a flag outside a religious building on Melton Road, Leicester.” This appears to have occurred while police officers were dealing with public disorder in the area. The incident is investigated.”