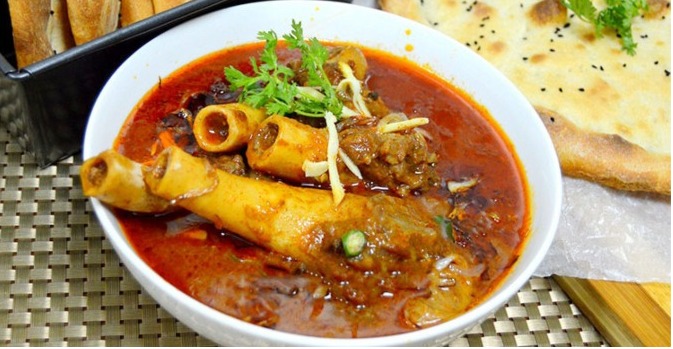 Nihari is a smooth, tasty stew made with flour, slow-cooked mutton, and a variety of spices. The cooking time for this mutton nihari recipe is about 4 hours, but it’s simple to put together. The mutton is cooked on a very low fire for up to four hours to achieve the greatest flavour. Traditionally, Nihari was prepared over the course of an entire night and presented to the Mughal Kings of Delhi for breakfast following early-morning prayers.

The meal, which originated in the imperial kitchens of the Mughals, has now transcended all boundaries of the area, religion, and course. However, because cooking Nihari requires a lot of time—nearly 5 hours—it is typically saved for exceptional events like Eid meals and other celebrations.

Nihari is primarily cooked using beef or mutton meat in Bangladesh. The preferred cut for Nihari is the shank piece. However, Nihari may also be prepared using lamb also.

Nihari masala is a combination of whole fragrant spices, much like garam masala. Cardamom, fennel, cloves, nutmeg, dry ginger, and other whole spices are roasted before being processed into a powder. Although making the masala mix in greater quantities and storing it in an airtight container is preferable, fresh preparation is preferred. The homemade Nihari masala may make vegetarian and non-vegetarian curries, and it stores well for up to six months.

WHOLE SPICES TO MAKE YOUR OWN NIHARI MASALA FROM SCRATCH

To make your own Nihari masala from scratch, dry roast all the whole spices for the masala, cool; and grind them to a fine powder.

Heat Ghee (you can use oil as well, but ghee makes it tastier) in a deep bottom stock pot. Once the ghee is hot, add the sliced onions and fry until they turn brown.

Add the nihari masala and 8 cups of water. Mix well, cover and cook on very low heat for about 4 hours until the meat is tender. Keep checking in between. The way to know that the meat is cooked is when it breaks easily with a wooden spoon.

Dissolve wheat flour in half a cup of water such that there are no lumps. Slowly add it to the gravy. Stir to mix it well in the gravy and let it simmer for another 10-15 mins till the gravy thickens.