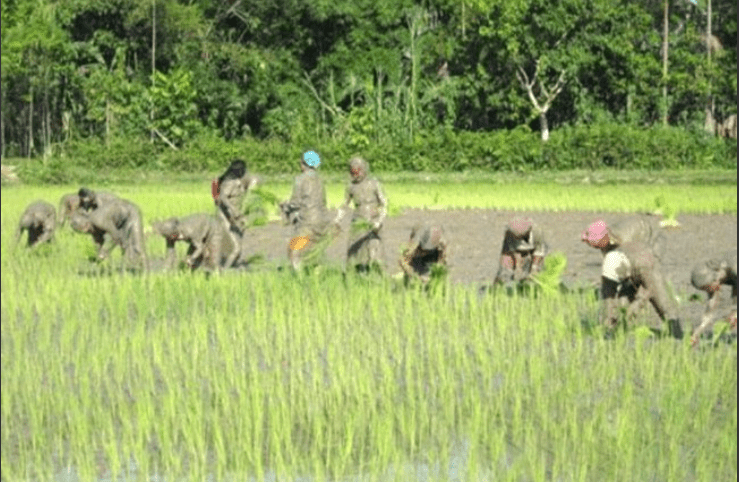 ‘ha’ means soil in the Garo language, ‘Jung’ means insects or worms. They have been friends with the soil since the past. The Garos named them ‘Hajong’ after seeing their agricultural techniques. It is thought that there was no race called Hajong before. In this regard, the Hajongs say, ‘Garo gila amla naam thuche hajong’, meaning the Garos have named us Hajong.

Many people think that they were a resident of Hajo Nagar, a state named after Hajo or Haju, the founder of the Koch kingdom in the Kamakhya area of ​​ancient Assam.

However, according to the commentary of Hajong, the meaning of the word ‘Hajong’ is to be ready, to be equipped, to be organized. This is because they think that they have been dispersed and reorganized in the past. And this is the origin of the name ‘Hajong’.

Many words from regional languages ​​of different regions have entered Hajong language. Hajong’s happiness-sorrow, value-pride, aesthetic form and diverse thoughts are expressed in their language. Like other tribes, the Hajongs live in groups in one place.

They call the head of the neighbourhood ‘Gaobura’. He is the one who performs various duties, including the arbitration of the district. Hajong is a village with a few neighbourhoods. They call the village head ‘Moral’.

The most prudent of the Gaoburas is the Moral. He was the one who solved various village problems with the help of the villagers. In this way, a few villages combine to form a chakla or joara. Its chief is called Chakladar or Joardar. One of the foremen is nominated for the post. Again a pargana is a combination of a few chaklas or tides.

The omnipotent ruler of the pargana is the king. The role of Gaobura and Moral is very important in Hajong society. So their dignity and power are more.

The peace and order of Hajong Para or village depend on the prudence and strong leadership of Gaobura and Morals.

Hajong’s ussab ‘pack game’. The festival is usually organized by the village headman or those who can afford it while planting roya (rice seedlings).

This is an original festival of Hajong. First, they plant rice seedlings in the land in August-September. Then, leaving one land vacant, the village foreman finished planting all his lands. He then instructed Chakora (a term of village society) to call everyone..

A date specifies when everyone will be present. Moral then invited everyone and announced, “The last paddy seedlings on my land will be planted.” Everyone will attend. Typically, a female member of the household is invited. Men and children occasionally participate in this joyous festival. The males cultivate the land and break the nets (picking seedlings from the seedbed). The girls also plant rice seedlings.

On that day, when paddy was planted on one side of the land, on the other side, everyone got around and started dancing and singing. The women then spread the pack (mud) on each other while singing. The song played by the pack is called ‘Gupni song’ by the Hajongs. Their pack dance is also different from other festivals. The packing game starts in the morning and ends in the afternoon.

At this time, Hajong women planted paddy with uludhvani and everyone smeared mud on everyone’s body. In this way, everyone in the village finished planting rice seedlings in the last land of Moral. At the end of the game, the land pack (mud) is lifted in two pots. Moral and his wife were then placed in the backyard and poured all over the body.

Moral then invited everyone to dinner. Everyone gathers at Moral’s house to eat after bathing. Binni rice, tortoise or fish, and pulses are served at this festival. Casa alcohol, made from flour and rice powder, adds to the festival’s joy. Hajangra employs musical instruments such as khola, dhapa kartal, zari (mandira), and others in the pack game’s dance song.

The primary goal of this festival is to foster mutual friendship and joy. This also demonstrates the Hajongs’ factionalism. However, the pack game is gradually fading from the tribe’s culture. The main reasons for this are decreased Hajongs, land allotments, the high cost of invitations, and low income.