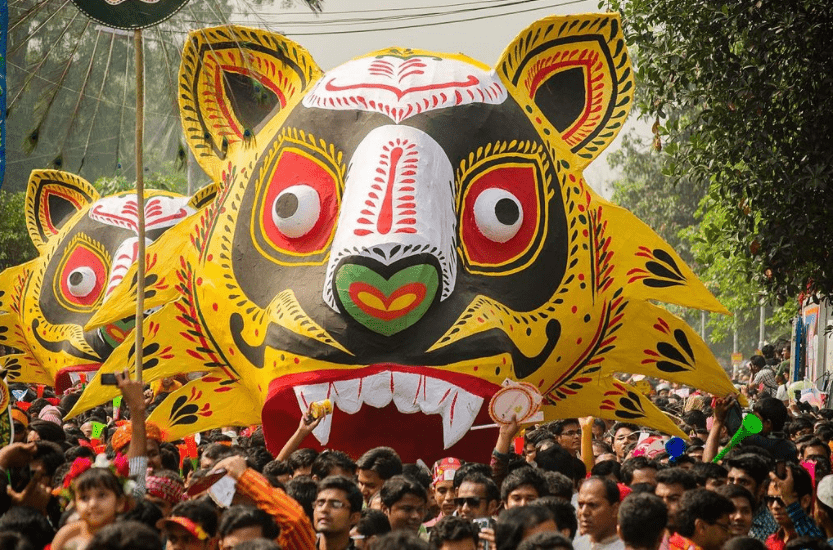 Pohela Boishakh A well-known Bengali festival This festival is celebrated by people of all faiths. Everyone marks the beginning of a new calendar year to forget all the old sorrows and begin anew. It is a Bengali cultural festival. They walked around the Baishakhi fair with a white sari on the red bank and flowers on their heads. People of all ages celebrate this day through a variety of festivals. How does this day fit into Bengali culture? What was the route of today’s first Baishakh from the Mughals? Many people are baffled by the situation.

Some historians attribute the origin of the Bengali calendar to King Shashanka of the 7th century. Later, Mughal Emperor Akbar changed it to collect revenue or taxes. He established the Mughal Empire in India. The emperors then collected the revenue of agricultural products according to the Hijri calendar. However, since the Hijri year is dependent on the moon, it does not match the agricultural yield. This forced the farmers to pay taxes at an inopportune time.

The Mughal emperor Akbar introduced the Bengali year to establish fairness in tax collection. He ordered the reform of the ancient calendar. At the emperor’s behest, the royal astronomer Fatehullah Siraj made rules for the new Bengali year based on the solar year and the Arabic Hijri year.

But this calculation method was implemented from the time of Akbar’s accession to the throne (November 5, 1556). At first, the name of this year was Fasli San; later, it was known as “Bangabda” or Bengali year.

The celebration of Pahela Baishakh started from the time of Akbar. At that time, everyone was obliged to pay all taxes, dues and duties by the last day of the month of Bangla Chaitra.

The first Baishakh, the landowners used to entertain the residents of different areas with sweets on the next day. Various festivals were organized on this occasion. This festival turned into a social event. Whose form has changed and has now come to this stage.

Halkhata means “a new book of accounts.” Halkhata is the account of the shops on the first day of the Bengali year. Officially updating Old yearbooks of accounts is closed, and new yearbooks are opened in villages and cities. On the day of Halkhata, the shopkeepers entertain their customers with sweets or different kinds of food. This practice is still prevalent, especially in the village market.

According to historian Shamsuzzaman Khan, Murshid Quli Khan, the Mughal subedar of Bengal, initiated the ritual of the first Punyah, meaning “festival of land revenue collection”, and he used Akbar’s revenue policy to introduce the Bengali calendar. Bengali San or Sal was an Arabic and Persian word, respectively. This indicates that a Muslim king or sultan first introduced it.

According to Shamsuzzaman Khan and Nitish Sengupta, the origin of the Bengali calendar is not clear. On the other hand, according to Sengupta, its traditional name is Bangabda. The word Bangabda is also found in two Shiva temples a few hundred years before the time of Akbar. From this, it is understood that the Bengali calendar existed even before the time of Akbar.

It is also unclear whether Akbar or Hussain Shah adopted it. Using Bengali calendars may have been carried out by Hussain Shah before Akbar. No matter who introduced the Bengali calendar, it was helpful to collect revenue after the spring harvest based on the traditional Bengali calendar, as in the case of the Islamic Hijri year, administrative complexity was created to fix the day of revenue collection.

The original name of the Bengali year was Tarikh-e-Elahi. The Mughal emperor Akbar introduced Tarikh-e-Elahi in 1585 by issuing a decree on March 10 or 11 of the 29th year of his reign. As soon as he ascended the throne, he realized the need to introduce a scientific, workable and acceptable calendar, where the calculation of days and months would be accurate. Therefore, he commissioned the then eminent scientist and astronomer Amir Fatullah Siraj to compile a new calendar with this objective in mind.

According to historians, the first Baishakhi festival is associated with the traditional Hindu New Year festival known as Vaishakhi and others. This festival is celebrated on the same day in different parts of India. Hindus and Sikhs celebrate this festival.

New Year’s festivities in India’s eastern and northeastern states are associated with the Hindu Vikram calendar. This diary is named after Vikramaditya in 56 BC.

In the rural Bengali community of India, like many parts of India and Nepal, Vikramaditya is credited with the emergence of the Bengali calendar. However, unlike those regions, Bangabda did not start in Bengal before 56 BC. Instead, it began in 593 AD. This indicates that the time of proof of the beginning of Bangabda has been changed at some point. It is believed that this change took place during the reign of Shashanka.

After the independence of Bangladesh, the Bengali New Year celebrations became a symbol of the non-communal consciousness of the Bengalis. Along with the festival, protests against dictatorship and evil forces have also come in the organization of Pahela Boishakh. In 1969, the first Mars procession was organized by the Institute of Fine Arts, Dhaka University. On November 30, 2016, UNESCO gave the status of World Cultural Heritage to the procession.

On the morning of Pahalala Boishakh, the new year is heralded by the sunrise. Meteorological events were held all across the country. Special food arrangements are also available. The Baishakhi Mela is held in an open field near the intersection of several villages. The fair promotes a variety of small businesses. There are several cake arrangements to choose from. In many places, panta rice is eaten with hilsa fish.

Organizing rural sports competitions is a long-standing tradition in this day and age. Boating, stick playing, and wrestling were once popular pastimes. The biggest wrestling event in Bangladesh takes place on Baishakh at Laldighi Maidan in Chittagong, also known as Jabbar’s Boli Khela. Shopkeepers can also be seen arranging stalls with various products in various parts of the city. There are also a variety of food stores. Various events, including Nagardola. Cultural events are held in a variety of settings. This is how the modern year is celebrated.

Apart from Bangladesh, Pahela Boishakh is celebrated in many countries, including India, England, Canada, Australia, America, and Japan. In other countries, it is mainly the expatriate Bengalis who celebrate this day through various events like their own. Many people think that Pahela Boishakh is the main festival of Bengali culture. From here, the Bengali fanatics were inspired to break through the web of evil conspiracies and fight against superstition and bigotry. The nation is united.