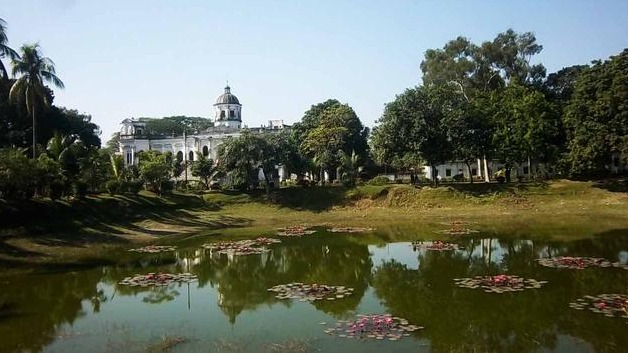 Bengalis, the wanderlust, take every opportunity to travel. There are numerous places to visit in our immediate vicinity! Tajhat Landlord House is a historic structure in the heart of Rangpur. You can also go to this traditional location if you want.

The ancient regime of ‘Landlord regime’ was also prevalent in Bangladesh. There were several zamindar clans in various areas, including Tajhat, Dimla, Kakina, Manthana, and Pirganj, in the Rangpur district. They had several palaces of huge size.

The most famous of them was the Tajhat Zamindar House. It is also known as Tajhat Rajbari. Tajhat Zamindar Bari is located 3 km southeast of Rangpur city. A part of this palace has been made Rangpur museum.

The then Landlord, Maharaja Kumar Gopal Roy, built the palace. It took about 10 years to build. Mannalal Roy from Punjab was the founder of this landlord. He was a goldsmith by profession.

Govindalal was also engaged in the profession of gold and diamond jewellery. The area was believed to be named Tajhat because of its attractive ‘taj’ or jewelled crown.

This huge palace is east facing two storeys, and its length is 76.20 metres. A 15.24 metre wide 31 central staircase made of white marble imported from Italy leads directly to the second floor. Behind the house is a secret staircase and a white marble stone fountain.

About 210 feet wide, the palace is as tall as a four-story building and has a large field in front of it. There are ponds and rows of trees on both sides of it. The architecture of the palace has traces of Mughal architecture. It is very similar to Ahsan Manzil in Dhaka.

Up the marble stairs are the museum. Kings use many symbols. Begum Rokeya’s letter to Sister Maryam. Apart from this, many historical artefacts include Holy Quran Sharif, Emperor Aurangzeb’s sermon, famous poet Sheikh Sadi’s French poem, and terracotta plaques.

From 1984 to 1991, the palace was used as the regional office of the Supreme Court of Bangladesh. Later, the Archeology Department declared the house a historic structure in 1995.

Today, Tajhat Zamindar House is an ancient heritage site that is attractive to tourists.

The museum is open daily from 10 am to 6 pm in summer and from 9 am to 5 pm in winter. There is a fixed fee to enter. Sunday is a weekend, and Monday is a half day.

You have to go by bus from Dhaka to Rangpur. For this reason, there are several bus services, including Green Line, TR Travels, Nabil Paribahan, Shyamoli Paribahan, and Hanif Enterprise. 500-1100 taka will be required for rent, depending on the category. One can easily get down from the bus by rickshaw, van or auto rickshaw to Tajhat Zamindar House.

Besides, there is Rangpur Express for Dhaka-Rangpur rail communication which leaves Dhaka for Rangpur at 9:10 am and reaches Rangpur at 7:5 am. Weekly closed on Monday.

There are several residential hotels in Rangpur city, such as Hotel Golden Tower, Hotel The Park, Hotel Shah Amanat, Hotel Tilottama etc. Besides, there are various hotels and restaurants for food.