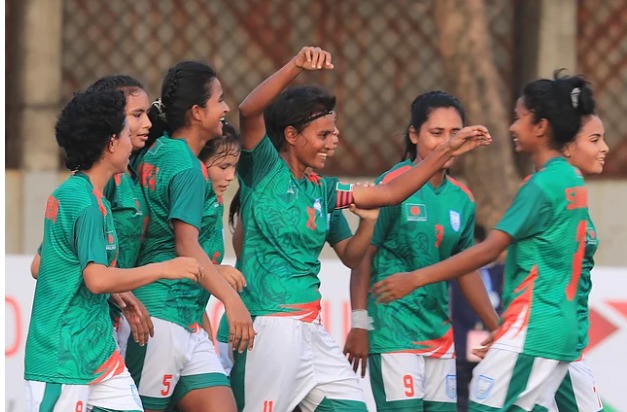 The Women’s SAFF Championship has been deferred to another round. The Women’s SAFF Championship in Nepal was scheduled to begin on August 12. But the South Asian Football Federation (SAF) deferred the first round at the request of the newly elected executive committee of the Nepal Football Association. Accordingly, the women’s SAFF was initially scheduled to begin on August 29 in Kathmandu. But once again, South Asia’s premier women’s football competition has been left behind. Instead of August 29, the game will start on September 6. The final will be on September 19.
The SAFF Championship has been postponed mainly at the request of the Indian Football Federation. India’s Gokulam Kerala Club will play in Uzbekistan in the AFC Women’s Club Championship from August 20 to 26. Most of the footballers of this club play in the Indian national women’s team.
India requested the change in the date of the competition to ensure that all footballers are available for SAFF championship football.
Confirming the matter, SAFF General Secretary Anwarul Haque said, “Indian Football Federation has sent us a letter requesting us to withdraw SAF.” 10-12 of their girls are playing in the AFC Club Championship. They will not be able to go to Nepal after returning to India after playing in Uzbekistan. For this he requested to delay the game by two weeks. We want to start the competition a week later on September 6.
A few days ago, Bangladesh girls played two preparatory matches with Maldives in Kamalapur ahead of the SAFF tournament.
Bangladesh’s highest achievement in the last five seasons was in 2016. Bangladesh was the runner-up in the event held in Siliguri, India. Sabina Khatun, Krishna Rani Sarkar lost to India 3-1 in the final. But in 2019, Bangladesh lost 4-0 to India in the semi-final of SAFF held in Biratnagar, Nepal. Sebar, however, could not play Pakistan due to FIFA’s ban. The last SAFF was held in Nepal with six countries. But this time Bangladesh, India, Pakistan, Nepal, Sri Lanka, Bhutan and Maldives will be the clean championship with seven countries. Bangladesh women’s football team has already started preparations for the sixth round. Gholam Rabbani’s team played two friendly matches against Malaysia at Kamalapur Birshrestha Mostafa Kamal Stadium in Dhaka on June 23 and 26. Bangladesh beat Malaysia 6-0 in the first match. Maria Manda, Manika Chakmara drew the next match goalless.