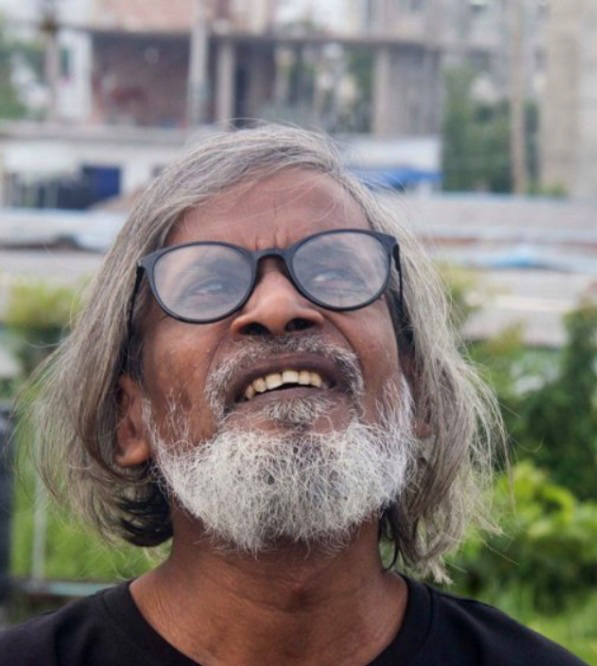 A song video titled “Tomay Aami Paite Pari Baji” got viral on social media a few years ago. An older man was singing the song with a scruffy beard and scruffy beard without the accompaniment of any musical instrument. At that moment, nobody knew who the older man was. At the time, few people knew his name. Hashim Mahmud is the nomadic artist’s name. He composed and wrote the lyrics for the song “Tomay Aami Paite Pari Baji.”

No one looked for him at that time. But now everyone is looking for him. Because the song ‘Sada Sada Kala Kala’ written and composed by this hidden artist, has been used in the movie ‘Hawa’ directed by Mezbaur Rahman Sumon.

Recently, this artist discussed this again with the song ‘Sada Sada Kala Kala’. Apart from sharing comments, netizens are also singing and spreading them on social media. Share on social media. Hashim Mahmud’s appreciation increased as the song spread. Everyone is looking for him. This is because he has sung the song in his own voice for so long.

However, the song in the film is not sung in his voice! Sung by Erfan Mridha Shiblu. Because Hashim Mahmud is now ill. He is no longer in a state to sing. This song from the film “Hawa” had no instruments other than the khamak. Long ago, Emon Chowdhury composed the song by playing the boat’s wood, bamboo, and pots and pans. Mithun Chakra also performs on these instruments.

Cinebiz Times asked Mezbaur Rahman Sumon, who wrote the lyrics to the song. Students in the Fine Arts Faculty at Dhaka University are very familiar with the name Hashim Mahmud. Sumon has talked to him for a long time over chat. There are many good things to remember. But sometimes, when he was busy, he moved away from Hashim. Very disconnected. But ‘Hawa’ will need Hashim’s song. So Hashim Mahmud’s secret was out for four months in a row. The song “Sada Sada Kala Kala” was then asked to be played.

Hashim is a resident of Narayanganj. He was not living a normal life and suffering from a complex mental illness called schizophrenia. As a result, the previous Hashim is no more. Inconsistencies in thinking and behaviour. Due to these reasons, Erfan Mridha Shiblu sang the song because Hashim could not sing it. Hashim Mahmud now lives with his mother on one side of his ancestral house in the Talla area of ​​Narayanganj. Age is approaching 50 now. There is so much fuss about the songs written by him. Does he know that there is so much madness among people?

The answer did not come much. He was staring. Later asked to know ‘black bird’? Now he answered. He said, ‘There is one. I wrote the song about a girl.’

Jamila Akhter Shefali, his mother, informed him of his current predicament. She stated that Hashim spends the day at home. He sings from within. Write in the journal. When the pen-books are complete, they are requested to purchase them. After his song became viral, numerous individuals flocked to meet him. Taking photographs [sobbing voice] today, everyone recognises my son. However, he cannot comprehend it owing to illness.’

Hashim Mahmud is the eldest in a family of five brothers and two sisters. His father used to sing. So Hashim Mahmud did nothing but music after passing his degree in 1994 because he wanted to be with music forever.

Hashim Mahmud is the favourite of all. He used to write rhymes himself and chat with children and adults about rhymes. Hashim’s family as well as his fans, now wish him a speedy recovery. He will once again enjoy singing.