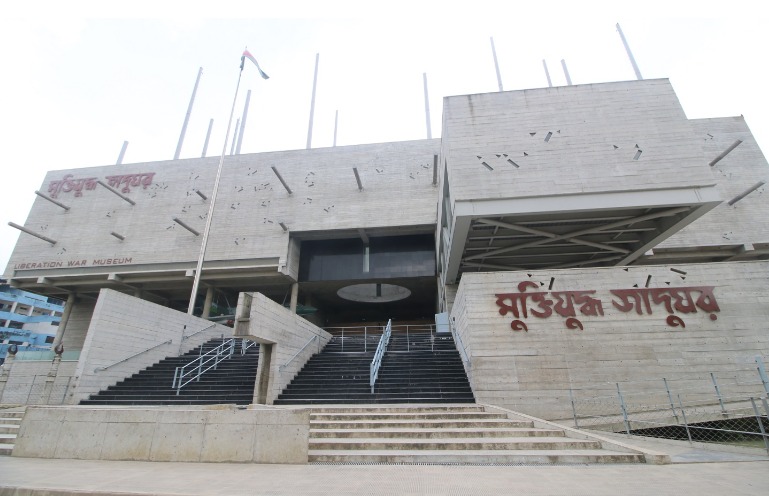 Liberation War Museum is a rare collection of various important objects of the great liberation war of 1971. It is now a modern architectural building in Agargaon, Dhaka Built.

The four galleries, covering an area of ​​about 21,000 square feet, contain various relics commemorating the liberation war, including relics, materials used by freedom fighters and martyrs, photographs, weapons, documents and letters. Besides, the bronze murals of Father of the Nation Bangabandhu Sheikh Mujibur Rahman and four national leaders have found a place in the Liberation War Museum. Memories and collections of the liberation war have been divided into four galleries.

This gallery collects maps of ancient Bengal, terracotta art terracotta, various historical monuments, the context of the British period and the state of Pakistan and various memorabilia of the general elections of 1970.

In this gallery, there are huge photographs of Bangabandhu’s historic 7 March speech, video footage of the speech, an Awami League press release, and various patterns of barbaric attacks by Pakistani aggressors on the night of 25 March.

The gallery contains the lifestyle of refugees who took refuge in India during the war, print of news published in foreign news, training of freedom fighters, activities of razakars, shelters of freedom fighters, guerrilla warfare and various patterns in the country and abroad supporting the liberation war. ‘

Tickets for the Liberation War Museum cost 20 takas per person. The museum is open to visitors every day of the week except Sundays from 10 am to 6 pm in summer and from 10 am to 5 pm in winter.

How to get there:

You can come to the Liberation War Museum in Agargaon by CNG, taxi or bus from different parts of Dhaka’s capital.