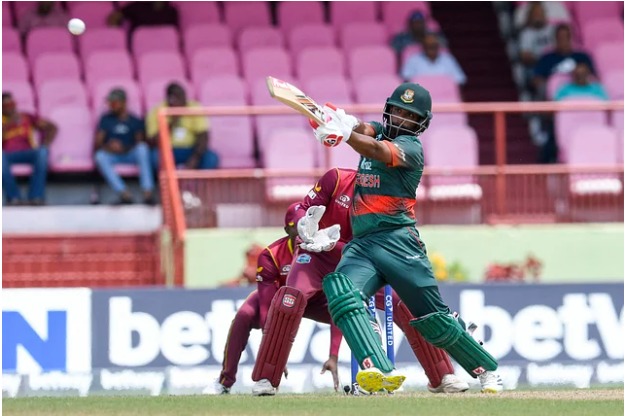 How did the Bangladeshi team’s tour in the West Indies go? It is not expected for the response to the question to be affirmative. Bangladesh has destroyed the Caribbean in the one-day international series after completely losing the Test and T20 series. However, the fans will be relieved if Bangladesh performs well in Tests and T20 matches. Part of the ICC Test Championship was the Test series.

The T20 series, which will lead to the T20 World Cup in October, has already begun the road. There was no Super League during the ODI series. However, an analysis of the Bangladeshi team’s performance during their tour of the West Indies reveals that the negatives outweigh the positives.

Test batting is that fade

No batsman could last long against West Indies’ pace bowling. Shakib Al Hasan, Liton Das, and Nurul Hasan batted well throughout the Test series. But none of the three is a top-order batsman. The worries about the top order before the start of the series increased after the series. None of Tamim Iqbal, Mahmudul Hasan, Nazmul Hossain, Muminul Haque got big runs. After Antigua, Enamul Haque was given a chance, excluding Mominul in St. Lucia. He also failed.

Shakib-Litton got runs, but top-order batters did not get runs like that in the Test series

Mohammad Ashraful has been seeing the plight of the Test team’s top-order batters for a long time. Ashraful explained the batting collapse, saying, “Since the draw has been unsuccessful for many days, the batsmen’s confidence is almost non-existent.” He has to play in harsh conditions against good bowling. Playing against a little weaker bowling, the confidence you get is not happening.

Brilliant test team bowling
The opposite picture is in the bowling of the Bangladesh team. The bowlers of the Bangladesh team have struggled in the Antigua and St. Lucia Tests, even with little capital on the scoreboard. West Indies have also noticed the continuous improvement of the pace bowling department, especially after South Africa. Pacer Khaled Ahmed was the second highest wicket-taker in the Test series with 10 wickets. Off-spinner Mehdi Hasan Miraj, who took 7 wickets, should also be called successful.

The fate of T20 has not changed

The old problem of T20-like Tests is not leaving Bangladesh behind. Bangladesh is always lagging because of quick runs. It is more visible in the West Indies. Bangladesh was lagging in the competition with the mercurial batting of the Caribbean.

After the first match of the T20 series was abandoned due to rain, West Indies defeated Bangladesh by batting in the last two matches. The match’s fate was written in Rovman Powell’s devastating innings of 61 runs from 28 balls in the second match. In the last match, Nicholas Pooran’s bat came with another 74 runs from 39 balls. No one from Bangladesh could play such an innings with a strike rate of 200.

Bangladesh batting coach Jamie Siddons said at the end of the T20 series, ‘We cannot beat the West Indies batsmen in the power game. We don’t have the physical ability of batsmen from other countries. But, with our strength, we have to make good scores consistently. A run or two is important here. As our bowling is good, if we can make a good score, then there is a possibility to win with bowling.

Power in ODI
Bangladesh has always been a better team in ODIs than the other two editions. However, the difference is more visible this time due to the loss in the Test and T20 series. A big reason for this is the wicket. The spinners of Bangladesh seem to have found ‘Mirpur’ in Guyana’s spin-helping wicket.
There was also the help of fate. Tamim won the toss in each of the three-match series. Bowling first on all three occasions, the Caribbean were restricted to short runs. West Indies’ runs did not cross 200. Three new chapters have been added to the story of Bangladesh’s incredible ODI success against the West Indies.

Win 11 games in a row, you can imagine! Although the, captain Tamim Iqbal did not get carried away and said the real thing, “The spinners got a lot of help in this series. If we play on a good wicket, we have to play better to win.’