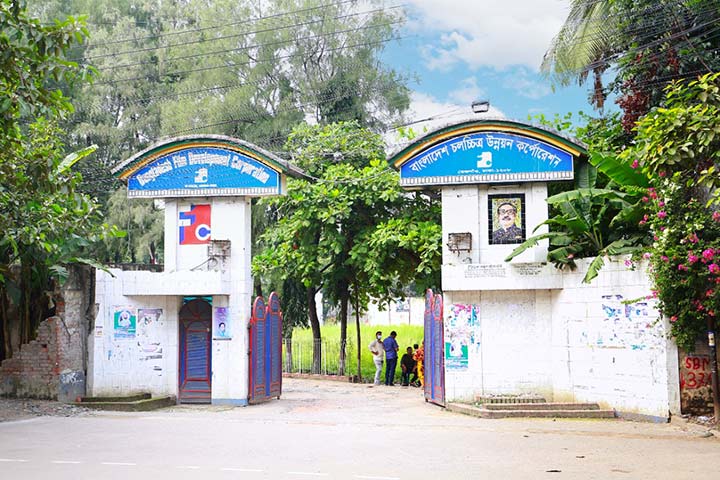 History of the beginning of the entrance

Golden days of FDC’s are fading away: On one sidewall of the main entrance of FDC, is a portrait of the Father of the Nation, Bangabandhu Sheikh Mujibur Rahman. Below is a piece of history. The Film Development Corporation Bill, introduced by the then Minister of Industry, Commerce and Labor, Sheikh Mujibur Rahman, was unanimously passed in the East Pakistan Provincial Assembly on April 3, 1956. However, the first shooting took place here in 1959. In the independent country, the name of the organization is “Bangladesh Film Development Corporation.”

At one point, visitors could be seen gathering in front of the main gate of FDC. Crowds of people would gather to see the stars of the silver screen at a glance. Now ordinary people are not so busy in FDC. The security guards spend their leisure time right inside the entrance.

You can see the FDC by cutting the ticket from the security branch counter on the left.

The entrance fee for visitors is 105 taka per person.

The government has approved large-scale projects to expand and modernize. The BFDC complex is being constructed at a cost of around Tk 323 crore.

The project was recently approved at a meeting of the Executive Committee of the National Economic Council (ECNEC). For a long time, those involved in the film industry have been demanding developmental measures of the government for the development of this industry.

This project is going to be implemented as a result of the approval. The BFDC complex construction project for film development will be implemented soon. The government hopes that through this project, BFDC will achieve financial self-reliance and growth, including the expansion and strengthening of the film industry, and infrastructural development through the construction of multi-storey buildings within BFDC.

The addition of various commercial and technical facilities in the building will also expand the recreation area and create a multi-purpose income area; Through which the foundation of the BFDC information film industry will be strengthened. The project will be implemented under the Ministry of Information.

Expenditure for this has been estimated at 322 crores, 7 lakhs, 8 thousand takas.

All of this will be met from government funding. The FDC, spread over an area of more than seven acres, had nine floors for shooting. But the old editing building with 3rd and 4th floors, a swimming pool has been demolished. That soil is now a combination of grass 6 The modern installation BFDC Complex 7 will be built on 94 katha land here This initiative is to increase the income of FDC However, the authorities seem to be indifferent to the other floors Most of the floors are covered with dirt.

Locks on most floors

Most floors are now closed Here usually floor or spot is rented according to the shiftMorning shift 8 from 9 a.m. to 5 p.m. Special shift 8 from 5 pm to 11 pm and from 11 pm to 6 am

In case of making a film, all the equipment except the camera can be used with a deposit of Tk 2 lakh If you use equipment including camera, you have to pay 1 lakh more.

The most expensive floor

A floor named after freedom fighter Jasim And there is no floor in the name of any actor yet. He received this honor as a freedom fighter after his death on October 6, 1996. FDC’s most expensive floor set during the construction of the rent per shift 5 5 100 taka. If you make a set on the second floor, you have to pay extra 3,500 taka  per shift.

At the time of shooting, the rent for the 2nd floor is 18 thousand 540 taka per shift.

Another reason for the reduction in shooting

Seventy percent of the films that were once made in the country were made here by the producers and crew.But now shooting is taking place with rent of different houses in Dhaka including Uttara It costs a lot of money to build a set at FDC and rent separate electricity bills, cameras and lights.So most of the manufacturers work outside of FDC.Elsewhere, rent is available for rent during the shooting.There is no need to pay separate electricity bills.

For a long time, FDC has been doing more work for commercials, dramas or television programs than movies.Floor No. 7 has been unannouncedly known as ‘ATN Bangla Floor’.

The channel has been working on various programs here for several years While constructing the set there, the rent per shift is taka. 3,72.The rent for each shift during the shooting is 7,500 taka

FDC has a total of 14 makeup rooms. Each is air-conditioned There is a chair for sitting in front of the illuminated mirror.There are also separate seating arrangements.

The rent of each of the makeup rooms is 2,100 taka.If you shoot in a makeup room, the rent for each shift is Tk 2,000 The actors spend most of their time in the makeup room during the shooting.But now that work at FDC has dwindled, these are almost always empty.

FDC has a canteen for everyone’s food.

Its signboard reads ‘BFDC-Canteen’.The owner of the canteen pays 30,000 taka per month to the FDC authorities Business is down due to low shooting and corona Tea, Singara, rice, fish, meat, onion, puri etc. are available here Right next to the canteen is the office of Bangladesh Film Development Corporation Arts and Craftsmen League.

The story of the association

The board of directors is just a short walk from the side of the canteen.

There is a garden in front of the Shilpi Samiti office A few coconut trees on one side.

Once upon a time many movies were shot here in the green ceremony.Rent for set construction and shooting at taka 2,000 per shift in the garden. There are all kinds of flowers in the garden.

It was one of the busiest places in FDC, the film-making factory.

Now there is no activity on the floor.There are several fences under the trees.

Keep a microbus and a private car that have not been used for a long time.There is dirt in both the cars During the construction of the set on the floor of the pot, the rent per shift is 1 thousand Taka.

At one time, shooting took place around the stairs, corridors, lobbies, roofs, grounds of floors 6 and 9 of different buildings. Now the presence of producers and stars can be seen in these places in Kalevadra In addition to spot rent, FDC authorities provide manpower.

In the light of the demand of the manufacturer, additional manpower including camera and light branch is provided Anyone can shoot in the room of the managing director of FDC.

Zaheer Raihan Color Lab is lying abandoned on the ground floor of the administrative building where the FDC officials work.

It was inaugurated on March 14, 1983 In the era of negative film, the lion’s share of FDC’s income came from the lab, the birthplace of film.After the digital production of movies started, the work in the lab gradually decreased.Now the negative is no longer used So for a few years the lab was almost closed.

The FDC was established to support and inspire the production of healthy entertainment films. Manna Digital Complex 7 is one of the additions here in the digital age It has been named in memory of the hero Manna.DTS Hallroom 6 is downstairs here It features digital technology video editing, color scheme and recording studio. The complex was inaugurated on July 16, 2006.

This place of FDC is quite famous! Viewers have seen this spot in many movies.

Water no longer flows from artificial fountains Shooting is not done at the fountain that has been neglected for a long time.

During the construction of the set, the rent for each shift is 2,800 taka.

And during the shooting, the rent per shift is 4 thousand taka. Several cement sacks, bamboo and tin are now left in the shower spot. Garbage is scattered all around.

Pond in the shower spot

The pond of the waterfall surrounded by trees is quite familiar to the visitors.A layer of green algae has accumulated on this pond as seen on the silver screen.There are no fountains. The small bridge over the pond is neglected.The dilapidated condition of the walkway around the edge of the pond Dirt has accumulated on the cement umbrellas arranged all around.No one even looks back.The construction work of the mosque is going on next to it Due to this, more and more dust is accumulating in this spot.