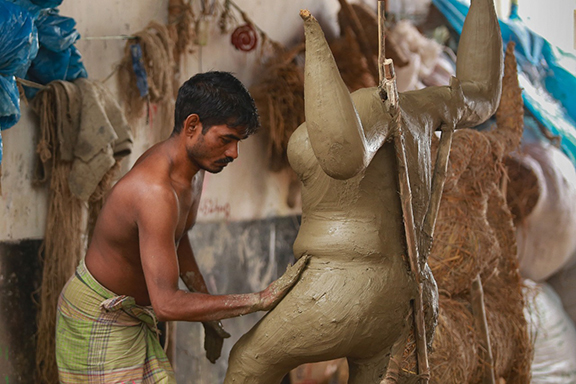 Durga Puja is the most important Hindu holiday in Bengal. No longer just one religious group has access to it. Everyone now celebrates Durga Puja, no matter what caste, religion, or caste they belong to. Not just in a religious way. From a sociocultural point of view, this festival is also very important.

During initiation, religious ideas were stressed. Still, Durga Puja has become a kind of “festival” that brings people from all communities together. A unique social festival, The Goddess Durga, is usually honoured three times a year. For instance, Sharadiya Durga in the fall, Basanti Durga in the spring, and Katyayani Durga in Hemant.

On the other hand, the first Durga Puja was held in the spring. Basanti Puja was its name. In the spring of the Satya Yuga, the Purana says, King Suratha made up for his wrongdoings by holding the Durga Puja. In the Mahabharata’s Bhishma Parva, it is also said that Sri Krishna told Arjuna that if he wanted to win the battle of Kurukshetra, he should worship Goddess Durga.

The festival of Durga Puja, which is mostly about the story of Rama, starts in the fall. During the Treta Yuga, Ramachandra prayed to Devidurga in early autumn to defeat the demon king Ravana and save Sita. It is also called “al Bodhan” because it happened before it should have. In Bangladesh, Dis the Puja is most often held in the fall. Bengali culture, which is based on farming, has decided that autumn is the best time for Durgotsav.

No one knows where the first Durga Puja was held in the subcontinent. Many people think the first Durga Puja happened in the fourteenth century or earlier. On the other hand, some people say that the Bengali Hindu Durga Puja dates back to the 1600s. Brindavan Das talks about Durgotsava in the book Chaitanya Bhagavata

This shows that Durgotsava was well-known before the 1600s. On the other hand, the poet Vidyapati of Mithila wrote the book “Durga Bhakti Tarangini,” which talks about the worship of Simhavahini Devi Durga.

So, we can say that Durga Puja was popular in Mithila before the 1600s. King Ganesha of Sri Hotta, which is now called Sylhet, is said to have used an idol to do the Durga Puja ceremony in the 15th century. Also, in the 1600s, King Kangs Narayan of Tahirpur in Rajshahi celebrated Durgotsava with clay idols that cost around eight and a half lakh rupees. This was done according to the rules of his royal priest father, Ramesh Shastri.

Later, he and Raja Jagat Narayan of Vaduria spent nine and a half lakh taka to celebrate Basanti Durga Puja. During the 18th century, this tradition was carried on by King Krishnachandra of Nadia and those who came after him.

So, Durga Puja was once a way for Hindu kings and landlords to compete with each other, and then it spread to the newly wealthy. Worshipping goddesses was important, but it was more important to show who was in charge and how wealthy someone was through worship. But the Bengalis spread Durgotsava all over the world in the 20th century. At this time, people also did “Barwari,” or universal Durgotsav, in addition to individual pujas. Since then, Durga Puja is no longer just for a certain class of people.

Caste and caste differences have been gone for thousands of years thanks to the Durgo Festival, which everyone holds. It has made it possible for the “high” and “low” to work together very strongly. At this puja, everyone, regardless of religion or caste, comes together in a true bond of friendship, harmony, and love. It fills the hearts of all Bengalis with joy.

In idols, Goddess Durga looks like a woman, but she is neither a woman nor a man. The Puranas say that he is a single thing or Mahashakti. The power that all gods and goddesses have when they work together. He has many sides to him. She is known as Bhagavati, Chandi, Uma, Parvati, and Adhyasakti Mahamaya.

He has taken on different names or shapes to help all living things and the world. He is Brahma Sanatani, the first power. Shakti means Brahma’s great power. This power will always be there. Its growth is everywhere. She is called Durgtinashini because she makes sure that nothing bad happens. She is Durga, the one who takes away sadness. Many people say that her name, Durga, comes from the fact that she killed a demon.

Again, to the person who worships her, she is a happy, loving mother and a helper. According to the Puranic Tantras, Goddess Durga comes to Earth with her family at this time of year from her home at Kailash. Four children, Lakshmi, Saraswati, Karthik, and Ganesh, were born to him.

Asura, who is the personification of evil, steps on the feet of Durga. The Goddess is standing on a lion with ten weapons: a trident, sword, chakra, arrow, Shakti, shield, bow, side, belt, and axe. He is called Dasabhuja because he has ten hands and can protect ten directions.

Every day, new things are added to the Bangladesh Shardo Festival. Everything about it, like making idols, lighting, and building towers, has become more beautiful. The worship of the Goddess is no longer limited to religious ceremonies and puja mandaps. Instead, our youth society has turned it into a social festival for people of all faiths. On the one hand, the music and dance of Dhak-dhol are used for worship. But, at the same time, they are also used for a number of social activities. Overall, Durgotsava is now the festival that everyone in Bengal celebrates. But Bengalis are the only ones who can’t get enough of worship.