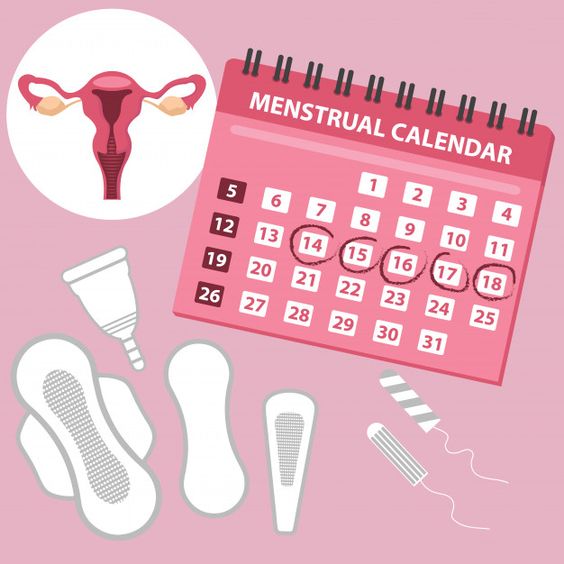 Menstruation is used to describe the normal vaginal bleeding that occurs during a woman’s monthly cycle. A female body prepares for pregnancy one month at a time. If no pregnancy occurs, the uterus, or womb, will shed its lining. Menstrual blood is composed of a combination of blood and uterine tissue. The vaginal canal is where it exits the body.

Periods usually begin between the ages of 11 and 14 and last until menopause, around 51. After that, the last three to five days on average. Aside from vaginal bleeding, a girl may experience cramping discomfort in the abdomen or pelvis during Menstruation.

They also have back pain in the lower back, breast bloating and discomfort, hunger pangs, irritability and mood swings, headaches, and exhaustion during a period. Sometimes these symptoms also start before Menstruation. Those symptoms are called pre-menstrual symptoms, or PMS.

A woman faces frequent mood swings during this time. Having all these issues, she has to work for a long time. She has to cook food for her family and do household chores. But most of the time, family members are so supportive that they try to help her during this period to feel comfortable. But if she is a working woman, she has to go out for work after having all these difficulties.

Because taking a break during any period may seem drastic, it’s not all that new. In some countries, this has been common practice for decades. However, 30–40% of all menstruating people experience severe pain and other symptoms each month. In addition, several studies show that menstrual cramps are responsible for an average of nine lost productivity days per year.

On average, a woman spends 3,000 days of her life getting her period. This amounts to 40 once a month, for about six days per cycle. When periods are long, especially when you also

have a reproductive disorder that causes heavy bleeding, such as endometriosis or uterine fibroids. If you’re having trouble with painful periods, you know the occasional (or frequent) need to take sick or WFH (Work from Home) days off when the cramps derail your day.

Leaving during Menstruation sounds like a dream to every woman. What if your workplace was more direct in recognising and welcoming your monthly feed? Paid menstrual leave is a concept that would allow menstruating people to take a paid break (usually an allotted number of days per month or year) during their period.

To include periodic leave in its labour legislation in 1947. Any woman who had painful Menstruation or a job likely to aggravate menstrual pain could take seirikyuuka (meaning “physical leave”). Others have since followed, including Indonesia, Taiwan, the Philippines, and Italy (although only for women with dysmenorrhea, severe pain in the pelvis or abdomen). The concept has recently made U.S. headlines: It was reported by the New York Times on August 11 that the world’s largest food delivery service, Zomato, had just changed its employee policy.

There’s no disputing that menstruation leave may have a profoundly positive influence in the U.K. and elsewhere. Not just for people who have periods but also for corporations. Period pain affects approximately 80% of women. Plus, with a record number of women working full-time (76.3 percent!), there are a lot of employees who have to deal with Menstruation at work.

As a result, period leave could benefit a large section of the U.K. workforce. After all, taking a break will alleviate any other form of discomfort. Generally, other medical conditions are not expected to be “pushed through,” nor are they encouraged to be concealed. We believe that menstruating people, like anyone else, should be allowed to recover. It ought to be a fundamental human right, in my opinion!

Furthermore, one study discovered that Menstruation caused an average productivity loss of 33%. So, giving people who have periods the option to take menstrual leave could make the time they spend at work far more productive and effective. So, it could simply mean a happier workforce, but one that works at its best when present!

Finally (but certainly not least), there’s the matter of taboos. Unfortunately, periods are still considered a “personal matter” rather than a medical one in many work contexts. This could explain why 36% of people in the United Kingdom who took time off work due to their period lied about the reason for their absence.

One important message can be sent by bringing menstrual leave into the public eye and enacting systemic, legal change: Periods must be taken seriously. Additionally, they are pretty standard. By and large, women associate Menstruation with the adjectives “painful” and “messy.” However, not all women experience the same discomfort during their periods.

Menstrual cramps can be excruciating for some women, making day-to-day tasks difficult. Anika (pseudonym) works for a multinational company. During her first period, she suffers from severe abdominal pain. She also added that she has to change the sanitary pad every hour for the first two days of her period. She said it’s very embarrassing to go to the washroom every hour in front of her male colleagues.

But, she says, “Menstruation is a natural process, and the experience is different for each woman.” Since we spend a significant part of our time at work, it is essential to open discussion to discard its taboo. “Menstruation leave is a welcome step as it makes a workplace more inclusive and gender-sensitive.

It was, without a doubt, a progressive decision that recognised women’s unique needs. Nevertheless, period pain is a serious problem that requires more consideration and compassionate treatment.

Every woman reacts to her menstrual cycle in her unique way. It is time for us as a community to be attentive to women’s needs and their specific health challenges, says psychologist Seema Hingorrany. Women are more likely to experience melancholy, mood swings, and hot flashes than men. Patients frequently tell me that they don’t feel like getting out of bed when they are on their period. If they could get this vacation, it would be better for them because their mental and physical state on those days affect their productivity and make them less productive at work.

Why do companies not want to provide paid leave to female employees?

South Korea: Women must be paid out for unused menstruation leave.

Taiwan: Three days per month that are not counted as sick leave.

Zambia; One day off per month.

Japan: According to a New York Times report, Japan had offered menstrual leave policies since 1947, when a law was passed allowing any woman with painful periods, or whose job might exacerbate period pain, to take time off.

China: According to reports on China.org, women will be able to take one or two days off on production of a certificate from a legal, medical institute or hospital.

A Mumbai-based digital media company declared a few years ago that all female employees would be permitted to take a day off every month’s first day of their cycle. Now 12 companies in India provide period leave to female employees.

Our country is still a long way from enacting legislation on menstruation leave. In Bangladesh, the concept of menstruation leave is a neglected and underappreciated issue. According to the International Labour Organisation’s ‘World Employment and Social Outlook: Trends 2018’ study, 28.4 percent of Bangladeshi women are employed. As a result, menstrual leave is a matter that deserves to be discussed. But some workplaces in Bangladesh provide paid leave during Menstruation:

Wreetu: Paid leaves per month for up to 5days. But if the employees want to work from home, they can do but not mandatory.

Some companies also provide “Work from Home” nowadays. So working from home appears to be the new normal at this point.

While writing this article, I researched what people think about it? Do they believe women need a paid leave on Menstruation? I took answers from both males & females. I also asked them what they think about how many days a woman should get a paid leave. A total of 10,693 people participated in this research. Among them, 6386 were Male & 4307 were female.

Do women need paid leave during their Menstruation?

As “working from Home” is the new normal. So, 1110 males & 939 females suggest working from home during Menstruation. Thus, no work will hamper. Companies also will not face any difficulties & employees will be aware of all kinds of updates.

According to Male, how many days do women need to be paid leave during Menstrution?

According to Female, how many days do women need to be paid leave during Menstruation?

Menstrual leave will improve working conditions for women, but it will also help eradicate the stigma associated with Menstruation. So it’s past time to consider including menstruation leave in the Labour Act of 2006 in Bangladesh and to go even further in breaking the long-standing taboo.

Statistics are taken from these sources: