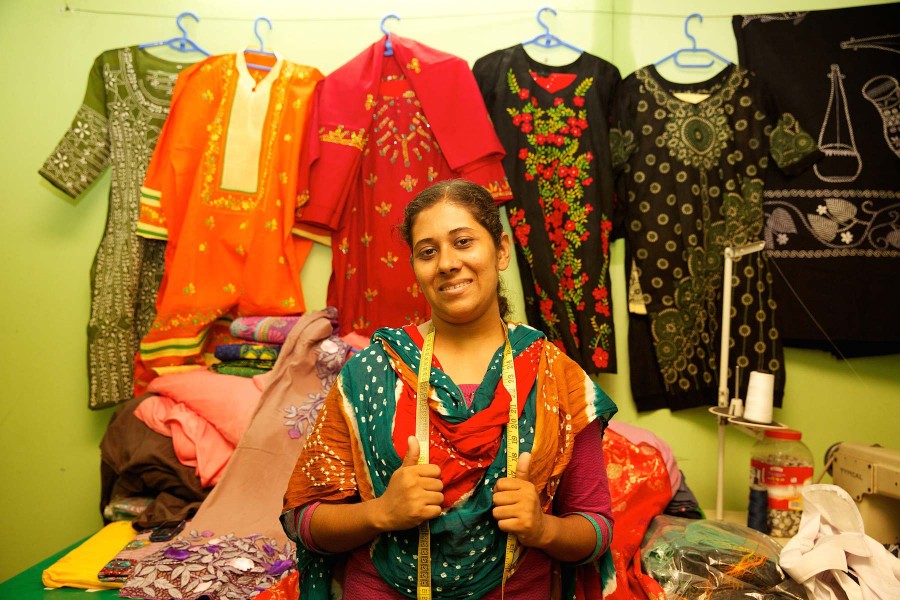 Bangladesh is likewise making progress toward being a middle-income country by 2021, with a per capita income of US$ 3500. Bangladesh experienced significant progress in women and children development efforts from 2008 to 2018, particularly in women empowerment, women’s decision-making, health and nutrition, and small business, including job creation. The country is now regarded as a model for other developing nations. The scope of achieving gender equality has extended and opened as a result of these advances in the socio-economic sectors. Bangladesh was ranked #1 for the second year in a row in the World Economic Forum’s Gender Gap Index 2017. Bangladeshi women are increasingly acting as a catalyst in the country’s development initiatives.

Parveen Akhter, 40, is the founder and Managing Director of Glamour Boutique House and Training Centre, the only small factory owned by a woman in Jessore, Bangladesh’s southwestern province. The 4,000square-foot firm employs 52 women and makes textiles and clothes. This is no minor victory for Akhter. She had little access to finance and was getting out of an abusive relationship when she first had the idea to start a small business from her home 12 years ago.

Akhter was kidnapped and forced to get married while she was in ninth grade. Her abductor (husband), who was addicted to drugs and abused her, resided in a slum with her. Because she taught herself tailoring, embroidery, and beauty services, she was frequently the only one working. Despite the threats and beatings, Akhter persisted in the marriage for 17 years because she had two sons to raise and no one to support her.

2007 was a watershed moment for Akhter. While her husband was going to attack her again, her son, who was 16 at the time, intervened and took her to court to file for divorce. When Akhter returned home from court, she posted a sign in front of her house that read, “Glamour Boutique House and Training Centre.”

After that, she began training women in the neighbourhood tailoring, batik (a traditional cloth design), and embroidery and selling some of her creations from her house.

The “Inclusive and Equitable Local Development Programme (IELD),” a multi-country collaborative initiative of UNCDF, UNDP, and UN Women sponsored by the Swedish government, provided much-needed assistance to OftAkhter. The program promotes local public and private investments in women-led companies and small businesses that benefit women and their communities, facilitating access to the labour market and entrepreneurial ventures.

“I had little machinery at the time.” After hearing my tale, the IELD Program administrators asked what I needed to expand. I stated that I required a variety of machines. I started my career with the help of IELD.

“Now, when I walk into a bank, the manager gets up and makes me a priority,” she says, reflecting on how far she’s come and what it means to her. My legs used to quake when I went before. So it’s a tremendous milestone for me to be able to give buyers my business card today!”

The IELD program, which is currently active in Bangladesh, Tanzania, and Uganda, identifies and designs a local pipeline of investable projects that are led by women or are gender-sensitive and are large enough to have a transformative impact by creating jobs for both men and women in the community. Mobility, access to resources, and getting bank accounts are the most common hurdles women confront.

Women in Bangladesh have made significant progress in the last decade, coming out of the home to engage in the economy.

Women have made significant contributions to the small and medium enterprise (SME) sector, accounting for around 25% of Bangladesh’s GDP. SMEs directly employ 7.8 million people and offer livelihoods for 31.2 million others.

Women entrepreneurs, on the other hand, face significant challenges such as difficulty obtaining loans and start-up capital, a lack of formal support (such as supportive public policies, access to financial institutions, and professional training programs), and limitations on their mobility and ability to network and grow their businesses. In addition, within the home and community, prevailing social norms and behaviours continue to construct barriers to their socio-economic empowerment.

Bangladesh has excelled in its economic order, educational growth, social transformations, and living conditions. Through educational and income-earning options, female empowerment has replaced the dark ages of putting women behind closed doors.

Women’s increased participation as entrepreneurs, both in Bangladesh and internationally, is the most significant advancement. In urban and rural settings, women have defied family and social structures to pursue entrepreneurship. The commercial operations varied, but the results are commendable in light of the social and cultural barriers that women face in Bangladesh and the enormous odds surrounding the socio-economic order.

Women entrepreneurs in Bangladesh have an advantage over male entrepreneurs, which is important to investors.

The fact that women control the great majority of household expenditures is one of the most obvious reasons to invest in women leaders in Bangladesh. Women are more likely to comprehend the customer’s perspective unless the firm is primarily focused on men. Long-term partnerships are frequently better for women than for males.

As much as it may be achieved with trust amongst employees, customers, suppliers, shareholders, government, and others, lasting relationships benefit a firm greatly. Fostering entrepreneurship is an important aspect of many local and national governments’ economic growth goals since it is a major driver of innovation and economic progress.

In Bangladesh, female entrepreneurship has undergone various changes. Initially, commercial projects were pursued by educated upper-class men who put their own money into them in order to make fortunes. Then came educated women, and a select number have made substantial contributions over time. Many uneducated women are improving family incomes through microbusinesses and reinvesting their profits in their families and communities today. These ladies also encourage other women in their communities to achieve their aspirations through grassroots entrepreneurship. Despite the fact that their enterprises are not commercial, they shatter barriers and empower other women to be self-sufficient.

Like other developing countries, Bangladesh has put its attention on the most vulnerable people in society: women. So, society has slowly come to realise that it can’t afford to waste half of its people on sex discrimination.

This growing government awareness has resulted in the implementation of national policies to aid in the development of women in all domains, particularly in economic activities, with a particular focus on entrepreneurial development.

The majority of women are not only poor but also trapped between two worlds: one shaped by culture and tradition, which confines their activities inside family homesteads, where they are viewed more as a commodity necessary only for bearing and rearing children, and another shaped by increasing landlessness and poverty, which forces them outside the home into various economic activities in order to survive. Nevertheless, women entrepreneurs in Bangladesh who have accepted life’s hardships and emerged as leaders in socio-economic development earn for themselves and their families or contribute to women’s sociopolitical growth.

The current administration has developed policies and programs to improve its situation. Some of the government’s programs include promoting equity for women and men, identifying women entrepreneurs, ensuring women’s easy access to markets, training for entrepreneurs, supporting services for financial and credit institutions, and promoting product development at home and abroad.

In a country where the male-female population ratio is nearly equal, women should have equal access to all rights, including property, resources, and money. Women’s economic rights can be guaranteed. As part of a macro development strategy, the government and society should be prepared to foster female entrepreneurship.

Further activities are hoped to pave the path for the optimal emergence and development of women entrepreneurs in Bangladesh.