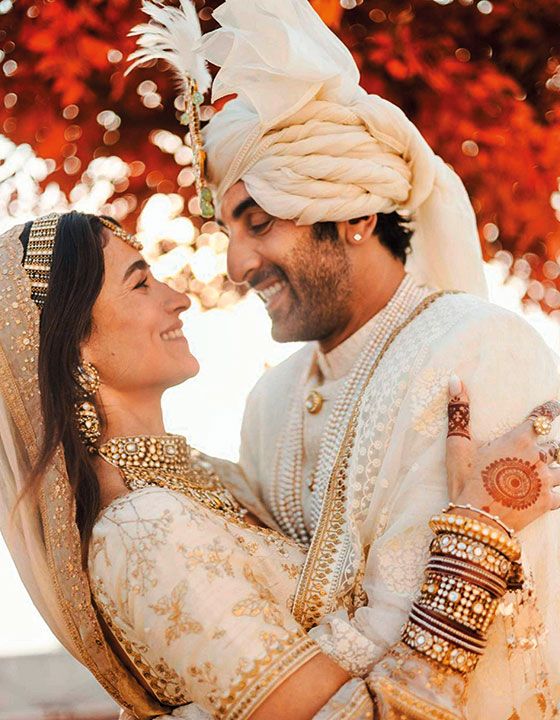 Ranbir Kapoor and Alia Bhatt started a new chapter in their lives. The Bollywood star duo got tied up in Satpa. Ranbir and Alia pledged to walk together at Ranbir’s Pali Hill home, ‘Bastu’. Alia found the man of the mind.

Ranbir and Alia tied the knot on April 14 at around 3 pm.

Bollywood’s ‘Most Wanted Bachelor’ is married in the presence of family and close relatives. Gayatri mantra has been uttered during the marriage. A picture of the late Rishi Kapoor was kept in the wedding pavilion.

Rumours of Ranbir’s affair with Alia surfaced just a few days after he ended his relationship with Katrina. Ranbir and Alia have never denied their relationship. On the other hand, Alia has always blushed with shame when she hears Ranbir’s name. Ranbir hugged Alia again and danced on the stage of the award ceremony.

After Katrina’s wedding, Vicky’s fans looked forward to Ranbir’s wedding. Alia’s Instead, the two stars married according to family tradition and customs.

It wasn’t until April 13 that the marriage date was revealed. The atmosphere of the festival in Balipara, on the other hand, was noticed a few days ago. RK House, RK Studio, Krishnaraj Bungalow, and Ranbir’s Pali Hill House “Bastu.” In the film “Bast,” Bollywood’s heartthrob married his girlfriend. All of the ceremonies, from Mehdi to the wedding, featured prominent members of the two families. Kareena Kapoor, Karisma Kapoor, Neetu Kapoor, Riddhima Kapoor, Pooja Bhatt, Soni Rajdan, Shahin Bhatt, and Mahesh Bhatt are among the celebrities who have visited Sageguje.

The rest of the guests include Alia’s mentor Karan Johar and Ranbir’s best friend Ayan Mukherjee, the director of the movie ‘Brahmastra’.

Ranbir gave eight diamond inlaid bands to the bride Alia at the wedding. He thinks number eight is lucky. That is why this gift. In an immediate response after the marriage, Neetu Kapoor said, “she has got the best wife for his son.