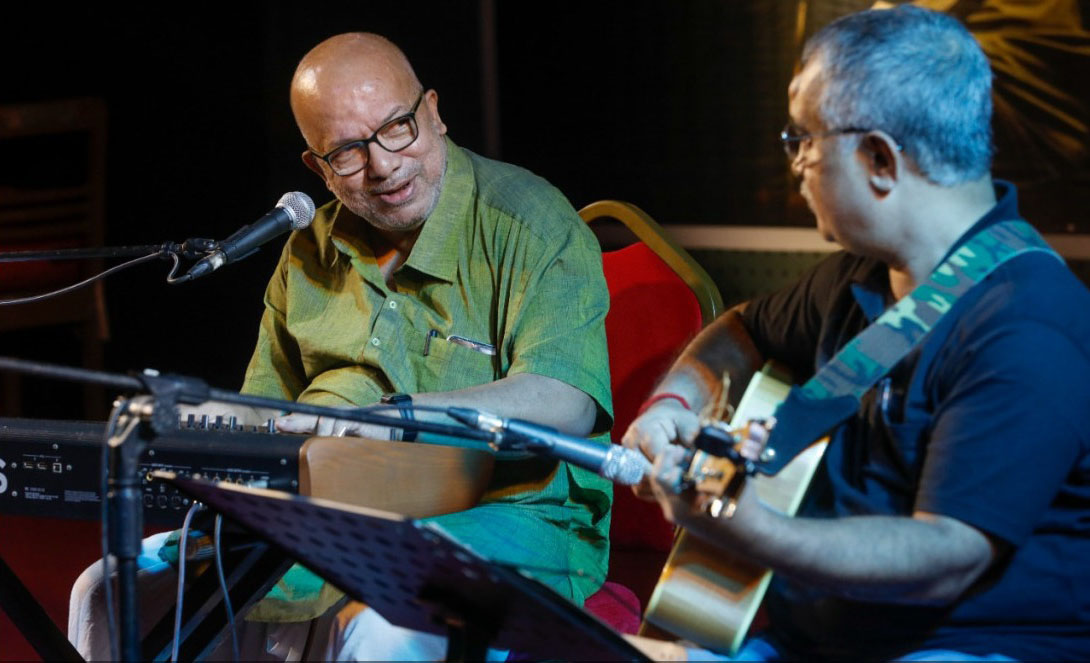 He is now 73 years old and cannot even hold his guitar like he used to. However, his mellifluous voice remains timeless – and he proved, like he always does, that every word, pronunciation and tune – makes him forever an icon of Bangla music, Kabir Suman.

The artiste, 30 years ago, started a revolution in Bangla’s contemporary music with the song “Tomake Chai”. After 13 years of absence, he graced Dhaka again with a concert, and the people in the Institute of Engineers Bangladesh (IEB) premises would remember this as something special.

The performance was supposed to take place at Bangladesh National Museum. However, two days before the event, Dhaka Metropolitan Police informed The Daily Star that the organisers did not have permission to arrange a show there, as the National Museum is a Key Point Installation (KPI).

Despite this oversight by the organisers, Suman did grace Bangladesh at a different venue. Once he got up on stage, it was evident that his love for Bangladesh had not diminished at all.

On January 1999, the militant organisation Bajrang Dal murdered Christian Missionary Graham Stuarts Staines and his two sons by burning them alive. In protest of this grotesque act, then Suman Chattopadhyay changed his name to Kabir Suman and embraced Islam.

A few days after that, in for a programme, poet Joy Goswami wrote a poem for him, which roughly translates to: There is no division in music when this musical bird sings, we will listen in groups, to Kabir Suman. We are sons and daughters of fire, and these skies are ours, call your wives, and we will listen to Kabir Suman.

Engineer’s Institute was filled to the brim, waiting for the legend to get up on stage well before the allotted time of 4:30 – it was proof of the point Joy Goswami made – music, especially Kabir Suman’s immortal words, will never fade away.

Many have said that after Rabindranath and Nazrul, Kabir Suman is the greatest thing to happen to Bangla music, a man that belongs to Bangladesh as he belongs to India. So when the great musician finally got up on stage at 5:15 in a traditional dhuti and Kurti, he instantly received a standing ovation from the audience.

Ever-charming and transcendental, Suman captured the audience with his quips, one song after another. Throughout the show, he played the keyboard with the efficiency of a master. He talked about Bangladesh, Sufia Kamal, and Shahid Qadri – evidently emotional.

During the programme, I was transported to the 20th anniversary of “Tomake Chai”, where poet Nabarun Bhattacharya proclaimed that Kabir Suman was a “People’s Artiste”. He further said that the guilt of West Bengal’s absence in cultural awakening through Suman’s music.

“Only fools write music, die with music if I die now, I will be reborn in your home” – Kabir Suman quoted Sufia Kamal in one of his many instances reminiscing.

Almost instantly after that, he delivered a stunning, emotional blow, “Was I even born with the good grace of being able to die in Bangladesh?”

This programme was a testament to the fact that even during the darkest days of humanity, people want to see the light. The light inevitably reaches you, and the poet elocutes some words that were unsaid for centuries. The revolutionaries do it with art – with songs they were never allowed to sing.

The likes of Pete Seegar and Paul Robeson did it, and so did South Asia’s legend, Kabir Suman.