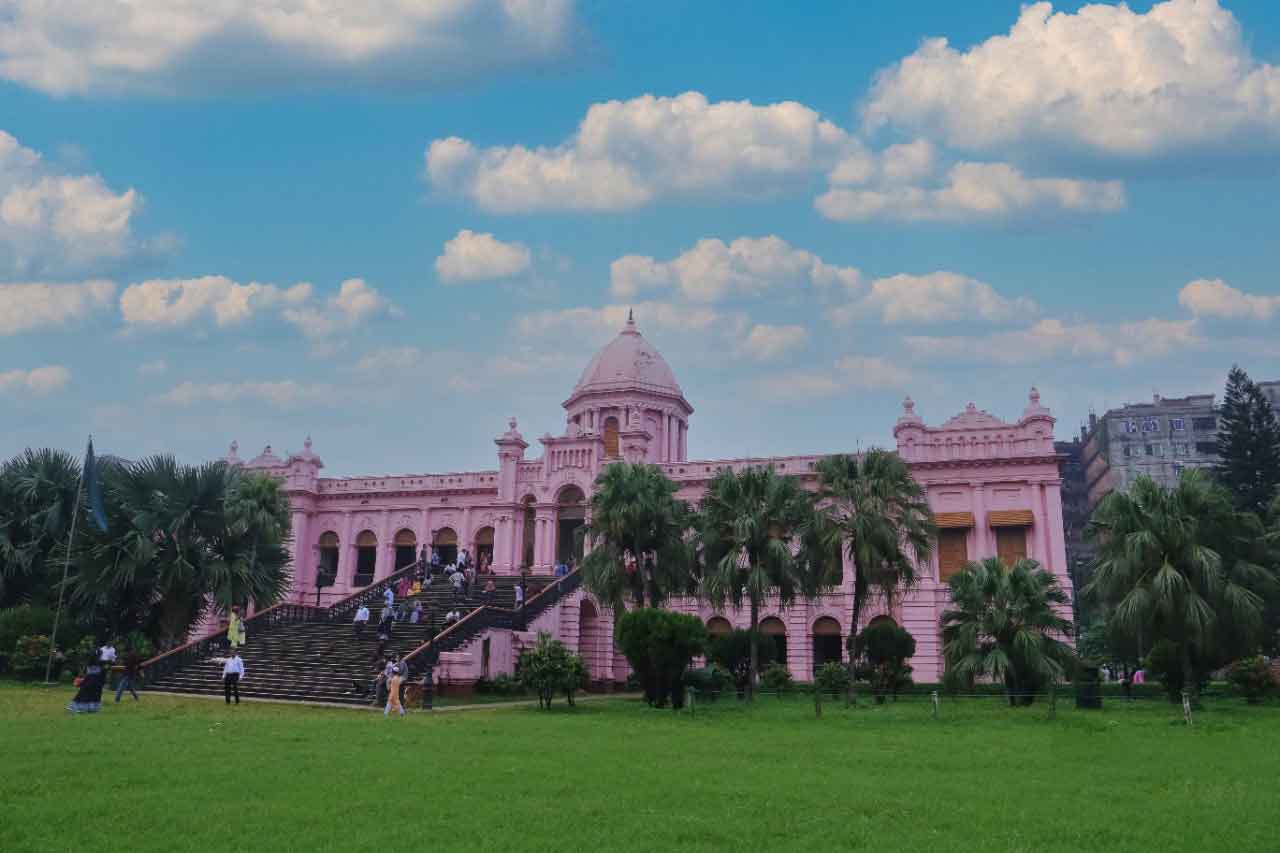 Ahsan Manzil used to be the residence palace of the Nawabs of Dhaka, which is situated on the banks of the Buriganga river in the Kumartuli area of the Islampur region, of Old Dhaka, is now considered as one of the best museums to relieve the ancient Dhaka.

Hundreds of visitors visit the monumental structure with their families regularly to experience this historical place, as Ahsan Manzil, still stands at Dhaka, with a hundred-year-old tradition being kept within.

The founder of the Ahsan Manzil was Nawab Khwaja Abdul Gani, who had named it after his son Khwaja Ahsanullah, as the construction works of the Ahsan Manzil had begun in 1859, and was completed in 1872, as the ancient palace still holds the historic memory of the Nawabi rule in Bengal.

The path of the political history of Bangladesh started from the Ahsan Manzil, as from here it was decided to establish the Muslim League in a meeting held here in 1906.

The background of the Ahsan Manzil

During the middle of the eighteenth century, Sheikh Inayetullah Ahsan, the Zamindar of Jamalpur Pargana, built a recreation building called Rangmahal on the present site of the manzil. Later, his son Sheikh Matiullah sold the Rangmahal to the French merchants, as the Rangmahal then had long been known as a trading post. However, in 1830, Khwaja Alimullah, the father of Nawab Abdul Gani, who lived in Begum Bazar, bought it and started living there.

At the centre of this residence, Khwaja Abdul Gani had created a master plan with European construction and the engineering company used to call it the “Martin & Company,” which was situated with the main building as Ahsan Manzil, as Nawab Abdul Gani named it “Ahsan Manzil” after the completion of the construction, after his beloved son Khwaja Ahsanullah. At that time, the newly built palace building was known as Rangmahal, and the old building was known as Andarmahal.

The whole of Ahsan Manzil was severely damaged by a strong earthquake on April 6, 1888, as there was no other alternative but to add the existing high dome of the Ahsan Manzil, which was highly damaged by the earthquake. High-quality bricks were brought from Raniganj for the reconstruction and repair process, as engineer Govinda Chandra Roy had conducted the repair work.

However, the earthquake on June 12, 1897, had damaged the Ahsan Manzil for the second time, as the Nahabat Khana, adjacent to Islampur Road, along with the South Verandah of the palace, had completely collapsed. Later, Nawab Ahsanullah rebuilt it. In 1952, the Dhaka Nawab Estate was acquired by the government under the Zamindari Eviction Act. However, the residential buildings of the Nawabs, Ahsan Manzil, and garden houses were excluded from the acquisition. Over time, the maintenance of Ahsan Manzil became difficult due to a lack of funds and the influence of the Nawab family.

The interior of Ahsan Manzil at a glance

There is a beautiful dome on the roof of this palace, as, at a certain time, the top of the dome was the highest in Dhaka city, and it is also beautiful to see the three-arched entrance outside the main building. The stairs to the top also attract everyone’s attention, as at the east and west ends are two beautiful arches, which are the most beautiful. There are two parts inside the Ahsan Manzil, as there is a living room and a library in the eastern part. In the western part, there are dance halls and other living rooms, and downstairs, there are courtrooms and dining rooms.

The beauty of the exterior

To build the dome of Ahsan Manzil, the square room on the ground floor was first filled with bricks and was given a round shape. On top of it, a similar round room was built on the second floor, as the room had been constructed in an octagonal shape near the roof by squinting. This octagonal room has become the barrel of the dome on the roof.

Finally, the dome-shaped room was made by gradually tilting the octagonal heads towards the centre, as the height of the dome from the ground is 26.13 meters, which touches the hearts of the visitors as an unparalleled beauty. Every room in Ahsan Manzil is reminiscent of history.

Exhibitions have been presented in 23 of the 31 rooms of the Rangmahal, as the utensils in Ahsan Manzil’s Toshakhana and the Crockery room including various specimens obtained from the Edward House, the old office of the Nawab’s estate; have been preserved in the exhibition.

In addition to the photographic exhibition inside the Manzil, various pieces of furniture have been made, and similar patterns from contemporary times have been purchased, collected, and presented in the gallery. The total number of artefacts arranged and collected so far in the Ahsan Manzil Museum is 408.

The role of Ahsan Manzil in enriching the history of old Dhaka is incomparable, as nowadays it has become an excellent place for the mass people to explore the history of the ancient Dhaka, as it may be the best school in history for the new generation, to learn about the ancient culture of the capital city of Bangladesh.