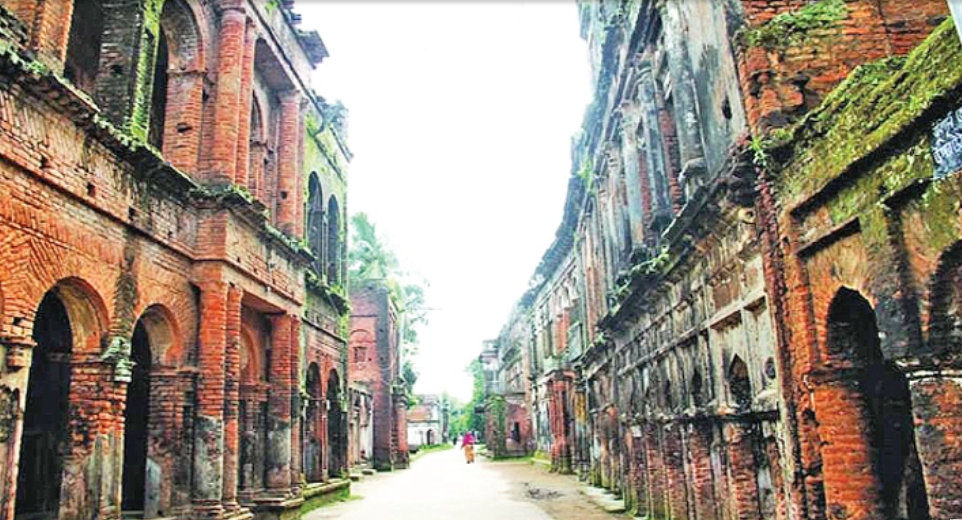 There’s silence everywhere. One or two people are on their way to the dead city. Every building in this city seems to be filled with quiet noise and unspoken history.
When you look at the buildings on both sides of the street, you can’t help but think about how prosperous the city was 450 years ago. As you walk to Panam Nagar, you might think that Isha Khan has died. Yet, there seems to be something strange going on there. Every wreck has its own story. Even though it is in ruins, it still has a lot to offer. The way the buildings are built is so interesting that you can’t help but be interested in it.

Sonargaon and Panam Nagar
Once upon a time, Sonargaon was the capital of Bengal. Because of this, trade, ports, and cities grew up around Sonargaon. If you look at where Sonargaon is, you can figure out how important it is. There are four rivers on all sides of Sonargaon: the Brahmaputra to the north, the Dhaleshwari to the south, the Meghna to the east, and the Shitalakshya to the west. This kind of location was good for business and trade. So, the village of Subarna became the capital of Bengal in 1338, when Fakhruddin Mubarak Shah was king. Its name was changed to Sonargaon at a later time.
Ibn Battuta wrote in 1348 that Sonargaon was an important port city because it traded directly with China, Java, and the Malay Islands.

Around the capital, an elite class grew over time. So who were the business people? Traders and merchants from other places used to stay here because it was a nice place to live. At that time, people from the upper classes needed help, so some towns were built in the golden villages to make doing business easier for them. One of them is the city of Panama. Wealthy Hindu merchants grew the city of Panam in the early 1800s, as shown by the inscription at the entrance to the city. The area was known for making and selling muslin cloth and indigo.

According to historian James Taylor, Arang’s loom was located at Panam in Sonargaon, and Panam Nagar was a famous market for the muslin trade.

Panam Nagar only has one paved road that people can use to get there. On both sides of this road, which is 800 metres long and 5 metres wide, there are 52 buildings. Even though some of the buildings have elements of local architecture, most of them are a mix of European and Mughal styles. There are one-story and three-story buildings here. The building’s walls are quite wide. The walls are made of bricks with different shapes and mortar. It’s like looking at the decorations on some buildings’ walls. People have used things like stained glass, stone, wood, porcelain, and terracotta for decoration. Even though most of the floors of the buildings were destroyed, few people, especially the Ansars who lived in the buildings, made it out alive.

Most of the floors are mosaics of red, white, and black tiles, but some are made of white and black marble.
Now that we live in the modern city of Dhaka, there is a constant fear of unplanned urbanisation. In case of a major disaster, there is nowhere to go in this city, and the empty space or yard in front of the house is just a matter of imagination. Even though planned urbanisation was important to people 450 years ago, we haven’t been able to make it happen in modern times. Yes, Panama is a city that was planned. In the city, almost every building has a space or yard. Some are in the front, some are in the back, and some are in the middle. There are paved ponds and wells for water. People think that the deep canals around the city are trenches built to protect the city. There are many places of worship, like monasteries, temples, and pagodas.
The natural and quiet setting of Panama City will make you feel like you’re in a different world in no time. You might want to look at the city from the top of a building after you’ve looked down. It would help if you didn’t try to climb on the roof because the buildings aren’t very strong. People in the area say that the roof of the building has fallen before.

Renovation of Panam Nagar
The once-great city of Panama went through a series of disrespectful changes over hundreds of years. Unfortunately, none of the different things that have been tried has worked. Once the work began, it ruined the work, which was the real face of this lost city. Archaeologists and people in the community spoke out against the result, and it was stopped.

In 2006, the World Monuments Fund added Panama to its list of the 100 most endangered cities globally. However, in 2001, the Department of Archeology of Bangladesh took the initiative to reform Panam Nagar. Local people occupied hundreds of years old buildings. Authorities opposed the protest with all available police forces, special services and the army. ” In 2009, the local administration started preliminary work after completely liberating Panam Nagar.

But in 9 buildings with a lime-surki coating, archaeological beauty was destroyed in the name of repairs that cost about half a crore rupees. The reforms will be put off if the experts get in the way. Now that we know what’s going on in Panama City, we can see that the buildings are standing tall with a lot of pride, but they won’t be able to hold that pride and will fall!

A deal was made with Young One, a multinational company based in Korea, to fix up five buildings, but it didn’t happen. In Panam Nagar, there is an Ansar camp, but it is not well run.

How to get to this city
Panam Nagar is a 30 km drive from Dhaka. Narayanganj is located in Sonargaon Upazila of Narayanganj. If you take a bus from Gulistan to Narayanganj, you can get to Sonargaon. You need to get off at the Mogra Para corner. To get to Panam Nagar, you can take an autorickshaw that runs on CNG or an e-bike.

You can see more in Sonargaon

If you leave for Panam Nagar in the morning, you can visit some more places in Sonargaon. Near Panam Nagar is the Shilpacharya Zainul Lok and Crafts Museum. You can walk from Panam Nagar to Shilpacharya Zainul Lok and Crafts Museum. Walking can take ten to fifteen minutes. You can also go by rickshaw or auto-rickshaw. As soon as you enter the Folk and Crafts Museum, you will see a large sardarbari on the left. You will see two soldiers on horseback by the pond. And if you go straight, you will find the museum.
Nearby is Baiddar Bazaar. From here you can rent a boat and go around the Meghna river. After that, you can cross the river again and visit Maya Island (the local name Nalchar).