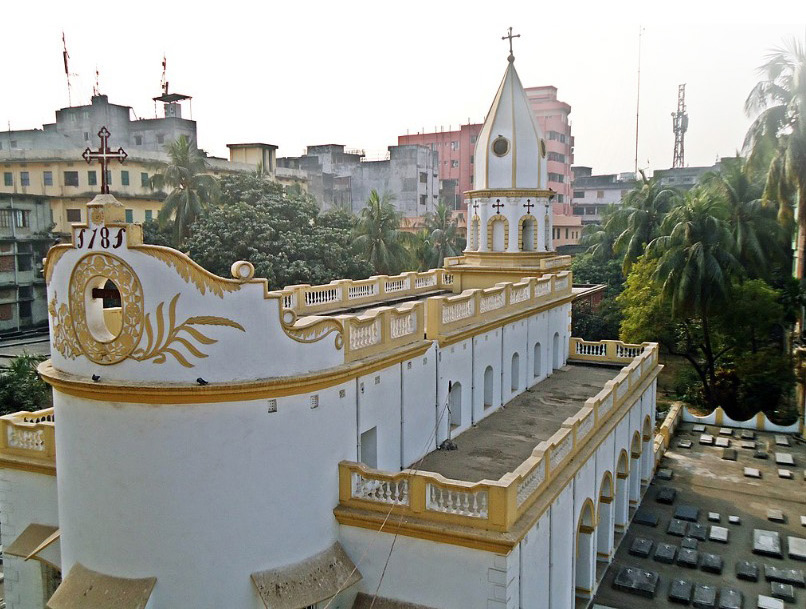 In March 2016, a picture was posted on the Facebook page called “This is Christian Armenia”. The main gate of the Armenian Church in Dhaka was seen in that picture. The caption below the photo is “Armenian Church in Dhaka”. Chris Garbiz Killian, an Armenian living in Europe, expressed surprise and commented in English, “Bangladesh? It’s amazing, it’s unexpected! “

They may have reasons to be surprised. But if they only knew in detail, not just one church, but an area called Armanitola. Armenians have lived in the area for over 300 years. Then perhaps the level of their amazement would have widened further. The last Armenian descendant left Dhaka in 2014.

History of the Armenians:

When the Safavid rulers of Persia conquered Armenia, their homeland in Central Asia, in the 16th century, the Armenians began to spread abroad. For political and commercial purposes, Shah Abbas rehabilitated about 40,000 merchants skilled in international trade in Isfahan and New Zalfa. It was from these two trading cities that the Armenians first came to Bengal following the Persian fortune-tellers. At first, they traded in Bengal on behalf of their Persian masters and formed their own community in Bengal over time.

The Armenians established their settlements at Hooghly, Chunchura, Saidabad [a suburb on the outskirts of Murshidabad], Murshidabad and Kasimbazar and some other trading centres of Bengal. But their main settlement was in Dhaka. They named their settlement in Dhaka Armanitola. This place still exists under that name as a reminder of their eventful presence. They were patrons of education. Nicholas Pogos founded Pogos School in Dhaka.”

The Armenian Church is located just behind Salimullah Medical College on the banks of the Buriganga in Dhaka. It was built in 1781. However, Armenians have been living in Dhaka for a long time. It is known from history that Armenians came to Dhaka in the sixteenth century. When you visit the Armenian Church Square, you can see the touches of history. A cemetery surrounds the whole church. The house of prayer inside is still there. The oldest tomb in Cemetery dates back to 1714.

A leaflet preserved in the church at Armanitola states that before the Armenians built their own church and Cemetery, they prayed at the Church of the Holy Rosary in Tejgaon, Dhaka, built-in 1677, and were buried there. The oldest tomb of an Armenian was found here. Khojah Avietes, son of Ledger of Arrival, died in 1714 and was buried in this Cemetery in Tejgaon. The epitaph has details written in the Armenian language. It is clear from this tomb that Armenians have lived in Dhaka for more than 300 years.

Although the Armenian Church, or Armenian Church of Holy Resurrection, was constructed in 1781 in Armanitola, older tombs have been discovered. In the epitaph, 1762 is written as the date of death. Except for this year, which is written in English, the remainder is in Armenian. It has been learned that a chapel existed here long before the church was constructed.

Armanitola was an Armenian colony. Initially, a chapel was constructed on the site of the church. Therein begins the work of prayer and burial. In 1781, the construction of the current church was initiated. This church took 13 years to construct. Armenians prayed at the church in Tejgaon for thirteen years. Since 1794, Armenians have prayed in this church in Armanitola.

Regarding the Armenian Church in Armanitola, it is said that in 1781 they [Armenians] built the “Church of Holy Resurrection” in Armanitola. Prior to the construction of this church, they used to worship in a small Christian church (chapel) in Armanitola. In 1838 they built a clock tower on the west side of the church. Unfortunately, the tower collapsed in an earthquake in 1897. There are several Armenian tombs inside and outside the church. Prior to the construction of this church, Armenians were buried next to the Roman Catholic Church at Tejgaon. Some of the inscriptions on these tombs bear witness to the presence of Armenians in Dhaka. Pagoj, Agassi, Michael, Stephens, Joachimus, Sarkis Manuks, etc. were some of the leading Armenian families. P Arathon, Margar David, McCarthy, Abraham George, Michael Sarkies, Abraham Lucas, M Hikazoni, AS McCarthy, Tigron Nahapit, Chadius Nahapit, MJ Kachatur, and Joseph Lazarus were some of the well-known Armenians.

In religion, Armenians were Christians following the Greek or Orthodox Church. They have built churches where a significant number of Armenians have settled. “

After the end of British rule in the Indian subcontinent, the Armenians began to leave Dhaka by way of the British. Until 1986, prayer meetings were held at the Armenian Church in Dhaka. After that, the regular prayers stopped completely due to the absence of any Armenian father or priest in Dhaka.

The current caretaker of the church is Armen Arsalian. He is the warden of the Armenian Church in Dhaka from outside the country. Al Mamun M Russell is the executive director of the church. In addition, there is manager Hasnat and a local supervisor.

Al Mamun M. Russell stated, “The Armenian church’s prayer meeting was discontinued in 1986 because no fathers resided in Dhaka.” However, an Armenian family was in charge at the time. Michael Joseph Martin and Veronica Martin are married couples. They have two daughters; their names are Sheryl and Christine. They left Bangladesh for good. A husband and wife jointly managed the church. In 2005, when Veronica Martin passed away, she was interred in the same church. This is the last grave of Armenians in Dhaka.

Al-Mamun said Michael Martin was left alone after his wife’s death. After tending the church alone for nine years, she moved to Canada in 2014 to be with the girls. And with this, the Armenians lived in Dhaka for more than 300 years.

According to Al Mamun Russell, a trustee was formed for the church. Armen Arsalian is the warden of the church from abroad. Al Mamun M Russell has been the Executive Director since 2014.

Michael Joseph Martin, the last Bangladeshi Armenian, died of old age on April 11, 2020, at 69. And with Martin’s death came the veil of the Armenians of Bangladesh.

The Armenians built their colony along the banks of the Buriganga, which reached Narayanganj. The official name of Chashara Junction in Narayanganj is A Circus Junction.

Al Mamun M. Russell said, “Through the Silk Route, Armenians came to this country to do business. Along the banks of the Buriganga River in Dhaka, they set up colonies. From old Dhaka to Narayanganj, they did many different jobs. They were linked to things as different as salt and leather. In the jute business, the Armenians did pretty well. Their businesses were called Circus & Sons, David & Co., Thaddeus & Nahapiet, Lazarus & Company, and so on. The Chashara junction is named for a jute trader named Mr. Sarkis.”

Al Mamun M. Russell said, “Armenians came to this country to conduct business via the Silk Road. Along the Buriganga River in Dhaka, colonies were established. From old Dhaka to Narayanganj, they engaged in numerous businesses. From salt to leather, they were associated with everything.

The Armenians did exceptionally well in the jute industry. These were their respective businesses: Circus & Sons, David & Co., Thaddeus & Nahapiet, Lazarus & Co., etc. Mr. Sarkis, a jute merchant, inspired the naming of the Chashara intersection.”

Jumman (73), who lives in Armanitola, was interviewed. He said he was born in Kasaituli next door. But, he said, “I used to see Armenians coming here to pray. Many also lived nearby. I don’t see anyone like that anymore.”

Prayers are now occasionally held in this Armenian church. Al-Mamun said that Armenians working in different embassies in Dhaka come on special days and pray like themselves. The church also has a fund. Named the Michael Martin Food Assistant Program. From where food is distributed to needy children and women every week.